Eritrea’s iconic photojournalist, former freedom fighter and first director of the state TV, Eri-TV, Seyoum Tsehaye is one the 16 journalists languishing in Eritrea’s infamous detention centers. Seyoum had solo photograph exhibition in 1997 in Asmara. Following the exhibition, Arts Lens magazine (now out of print) interviewed him. JJ Noalwi from Asmara has sent us the interview to reproduce it:

“Just I archived how Eritreans were making life something worth from nothing.”

On December 3 of 1997, Asmara’s Municipality Hall witnessed one of the city’s highly credited photograph exhibition by veteran journalist, photographer
and cameraman, Mr. Seyoum Tsehaye. In this pictorial exhibition, Seyoum presented 200 photographs he shot in different parts of Eritrea. During the
18 days of Seyoum’s works exhibition, Asmara’s residents testified the power of photograph in archiving and narrating resilient Eritreans role in the
revolutionary struggle.

*How did you start swimming in the photojournalism profession, or generally, what are the provocations for your profession as journalist and veteran cameraman?

I do not remember exactly; but when I was a 5th grader, I was spending my time drawing different subjects. But these were actions that were igniting anger
and intolerance among some teachers. After some years—to be exactly in 1975—Asmara founded itself in military and political debacles. Thus,
Asmara University halted its ordinary educational mission. But I joined the French College. In fact, my dream was to be a journalist thus to pave an
opportune ground to visit vital local and international sites, hubs of cultural treasures.

*And I have managed that you joined the revolutionary struggle in 1978. How do you remember the event, the reasons for the decision?

I grossly failed to pursue my desire, my truly inspired dream; politics was there, relentless social crisis was common. Even there were not opportunities
to create or achieve your dream. Then I joined the popular revolutionary struggle—Sewra—in 1978. After accomplishing intensive military
training, I was assigned to the ‘Handesa’ Unit, one branch of the Sewra that endeavors with mine and related issues. And I gave my active service till
1984.

It was in this year that I was heralded with an opportunity to pursue my dream. I was reassigned to the Information and Agitation department; I was really
happy. I then declared that the day at last arrived for pursuing my dream.

*Here, therefore, where was your first field mission and what peculiar events do you remember?

Imagine getting an opportunity in the war-zone which you had once obliterated from your lists. My first assignation was then to archive details of displaced
Eritrean children in the field, in addition to working in documenting panoptic daily life of our citizens in the field. When I approached to one of
these camps, many children surrounded me and were asking heart-stabbing questions: “Are you my father? Whose father are you then? Are you not my father…?”
These words are still in my mind; deep grief invaded my heart. Even some parents of these children might be passed-away in the struggle for liberation
of the country. Thus, I continued archiving all these and other similar ramifications. 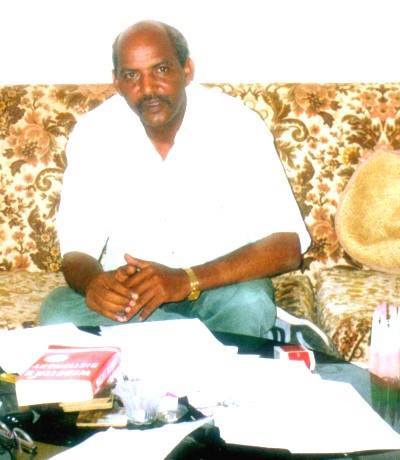 *And let’s return you back to the Battle of Barentu. Even you were assigned there. What really engulfs you back regarding that battle?

Before the fully-scaled military clashes in the Barentu Battle, my photograph works were limited in horizon and number. But when I was assigned to archive
the field, though it was full of grief-stricken moments, but I was consoled by the results of my job. The victory of the EPLF was also indescribable.

*If I am not mistaken, you were even travelled to Sudan’s immigrants’ camps. Any long-last impressions…

Eritrea society always catches my heart and makes me to think of my people through the lens of cameras thereby to zoom their realities. In Sudan, I visited
different camps. I photographed all-round walks of life of displaced Eritreans. Yet, even while they were far from their beloved home, no matter of
the challenges they were encountering, their dream was working for Eritrea’s liberation. Think about the numerous challenges; nostalgia, burdens of
life, leading a life without any fundamental provisions. Just I archived how Eritreans were making life something worth from nothing.

*Then may I return you to the aisles of Af’abet and Keren battles. I heard of one photograph you took in Af’abet. In respect to the parameters you have for not ranking your photographs as ‘best’ or ‘least best,’ but why you care more about this photograph you shot in Af’abet?

This is about people’s undeniable role. Even this picture that I took in Af’abet is heartily honored for its narration. This photograph shows about this
aged but tenacious father who captured five enemy soldiers on their en-route to escape. This aged father then armed himself with one of the abandoned
Kalashnikov of the enemy. To me, this is a testimony of Eritrean people inescapable role and whimsicality for liberation. I am glad for photographing
this event, an outstanding accomplishment by a hero father. Here, therefore, since every photograph has its own significant history, important chronicles
of the multi-facets of Eritreans, I vehemently oppose ranking the photographs, including to the motion pictures.

*Now let’s give me the opportunity to ask you about Massawa. In an interview with Samuel (AkaAka), you authenticated of the solemnity you were suffered during the 1990 bitter war. Since every war is ugly in its roles and its aftermath impacts, why Massawa in particular?

After two days relentless walk on foot was I and my fellow entered Massawa. Before this, I was in Southern Region of the country. Though I archived the
distressing life because of drought and starvation, like other people in the country, the people’s moral was highly-motivated. This was what I witnessed
in South region. But in Massawa, warplanes of the enemy quarter really succeeded in changing the port-city to a scenario of blood-shed; avenues were
filled with unburied corpses. Screams and wails of the children in quest of their parents, witnessing human flesh burnt of napalm bombardment…are
not describable.

To this day, that war is still the notorious to me. As the war had trilateral battles—the navy, infantry of the land forces and relentless bombardment
showers from warplanes—imagine photographing and the archiving mission there. Only patience was my source of stamina though it is undeniably
difficult to shot such events.

*And you might not heard of Eddie Adams—the renowned American photojournalist—who is well credited for participating in over 13 war zones. Won the Pulitzer Prize in 1969, he had once an ambition to ask you about your moment near Dekem’hare areas; I think it was during the final battle toward advancing Asmara. Do you remember it?

Absolutely! I have full memories of that event. It is unforgettable operation. Our forces from the revolutionary unit first stormed the enemy’s quarter.
Despite the efforts, the blockade efforts of the enemy came right only when we visited Endaba-Habesh. It was temporary…but not its impacts.
After the incident, our unit commander ordered to chase after safe areas. Our hero fighters started moving in search of save haven.

Suddenly, heavy artilleries fired by the enemy forces. These fighters who hadn’t any vanguards for sheltering their life from the heavy arsenals sacrificed
their life for Eritrean people. Moreover, I have archived the moment from the movements till their sacrifices; for sure, they left us with their honored
legacies. Yet, my camera’s lens was partially broken by the pieces of the heavy ammunitions. With a heart that was clearly demarcated by sorrows and
triumph, accompanied by a broken lens of a camera, I did the job. The cost to liberate the country was heavy, beyond words and dreams. And I archived
it triumphantly.

*Then you have this distinctive day, May 24 of 1991. You entered Asmara with those who first saw the city’s mesmerizing scenario. Now take us six years back…just elaborate something about that day…

I was, with my cameras, wandering across Asmara’s and peripheral area avenues for seven days. The emotions were deep. Everyone was in the street. Still,
the country was without any formal transitional government or revolutionary administrating office; but they were the most celebrated days of ecstasy,
great days in which Eritreans epitomized their borderless enthusiasms for liberation, an independent country. I worked, together with my fellows, seven
days relentlessly. Just I recommend people to unfold the archives to testify this; they are beyond words.

*Then was this significant BBC coverage on your efforts for launching the first program of Eritrean television in Eritrean language. How the BBC enabled knowing about this and, of course, the remarks and pillars for such initiatives?

This came true when I was ordered to archive, if there were any remnants from the enemy quarters. Then, when I arrived in Assab, the stocks of arsenals,
sophisticated ammunitions and other military appliances I archived were amazing for their ranges of capacities and quantities. I documented it properly.
Then was I discerned that there was only one tower in the port-city. The technician agreed for my initiative to launch a television program in any
Eritrean language as testing efforts.

We made it; we hadn’t even editing machine or other studio equipment. This was on 10-06-1991, the first historic day Eritrean voices aired through a television
program. For this was then a group of BBC journalists produced their program ‘One Man, One Camera and One Television.’ As cultural legacies of the
ex-colonial force was in its deeply founded roots and empowered impacts, the effort, though it was limited in human power and coverage, was tremendous
in laying foundation for the journey of the next national television.

*Now I registered some of the critical documentaries that have been shelved in the library of Eritrea Television. What was your role in modeling such numerous docudrama films and pure documentaries? Why you had to take so decisive roles…

Soon, I was Head of the Documentation at the Eritrean Television in Asmara. I have shouldered my responsibilities for archiving Eritreans multi-facets;
that time was full of critical concerns on how we have to build the bridge that ensures our journey from the euphoria to real independence, I certainly
believed that archives are vital thus to draw some lessons for constructive engagements. Then, in short time, I prepared over 20 documentaries. ‘Tegadaly
Sealay (The Liberation Fighter and Photographer)’ is one of them.

*That’s really capturing moments. I am honored to have you at last Mr. Seyoum Tsehaye. I, embracing to editors and my crew, offer our borderless thanks for this opportune moment. While authenticating a prospective future career, this is the last edition of our program. If you have any messages, then, take the opportunity.

All these photographs—including others, which are not exhibited to the public—were shot with normal cameras. I offer my deep appreciation to
those who allowed me to have these normal and semi-professional cameras from their homes. I even admire my family, friends and you even for the initiative
you take for having my experiences. Until other well excelled moments, I wish you all the best.

©Arts Lens allowed PEN Eritrea under special arrangements for using this article originally in accordance with their own internal guidelines.