Tom Lantos Human Rights Commission of the United States Congress (TLHRC) conducted a public hearing under the title: “Eritrea: Root Causes of the Refugee Crisis” in Washington DC on April 18, 2018. PEN Eritrea’s Executive Director, Abraham T. Zere was one of the four witnesses who testified at the hearing.

The event was hosted by congressmen Randy Hultgren and James P. McGovern in three panels.

In his testimony, Abraham shared how freedom of speech has been suppressed in Eritrea through the state’s punitive measures and scrupulously targeting journalists. Highlighting on the lack of opportunities and foreseeable future for the youth, he stated that Eritrean youth opt to flee their country in droves even if they are aware of the dangers and abuses they might face in their journey to safe destination. 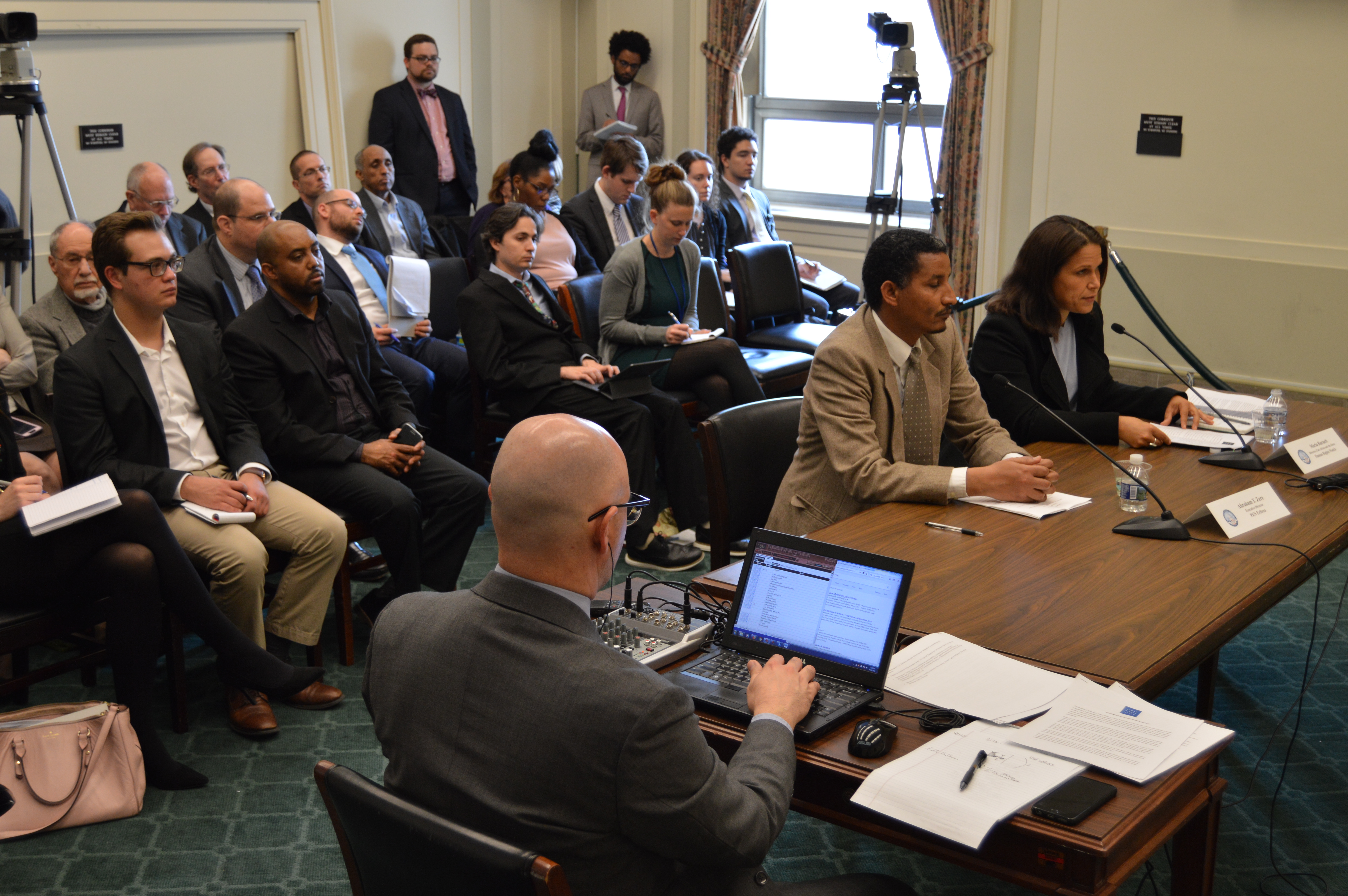 Replying a question if solving the no-war and no-peace situation between Eritrea and Ethiopia can have effect on the crisis, Abraham said that putting pressure on Ethiopia to implement border demarcation decision of the April 2002 can have an effect as the Government of Eritrea has always used that as an excuse to suppress the basic rights of Eritrean citizens.

He also indicated that conditions for journalists have been getting worse over time and access to accurate information is difficult as concerned organizations and journalists are only depending on personal contacts and informal channels. Abraham also stressed that US and international community should stand behind Eritrean refugees scattered all over the world, and especially those in the Sudan, Uganda, Israel and help them settle in safe third countries. He also added that the commission should exert pressure to stop deportation of 700 Eritreans from US whose asylum requests have been rejected as it is not safe to deport them to Eritrea now.

Maria Burnett, East Africa and the Horn, Human Rights Watch, who was in the same panel with Abraham, also gave her testimony on the conditions of human rights in Eritrea. Stressing how inaccessible Eritrea is in this regard, she indicated that continuous dialogue and engagement with governments of Eritrea and Ethiopia could have positive results.

In the first panel, Jana Mason, Senior Advisor, External Relations and Government Affairs, United Nations High Commissioner for Refugees, presented her testimony where she stated how the Eritrean refugee crisis has been under-reported by the international media. She also listed various causes that fuel the migration of young Eritreans and the ordeals they go through under smugglers in their rout to Europe.

Father Thomas Reese, Commissioner, United States Commission on International Religious Freedom, also gave a testimony on the lack of religious freedom in Eritrea. He highlighted that Eritrea has been listed by State Department since 2004 as a country of concern regarding religious freedom. He also gave the example of how Abune Antonios, the 90-year old Third Patriarch of the Eritrean Orthodox-Tewahdo Church, was deposed from his position and has been held in a house arrest for the last 12 years.

Tom Lantos Human Rights Commission is a bi-partisan commission, established by a unanimous consent of the US House of Representatives in 2008, charged with promoting, defending and advocating for international human rights as enshrined in the Universal Declaration of Human Rights and other relevant human rights instruments.

*Tedros Abraham is Treasurer of PEN Eritrea and can be reached at tedros@peneritrea.com