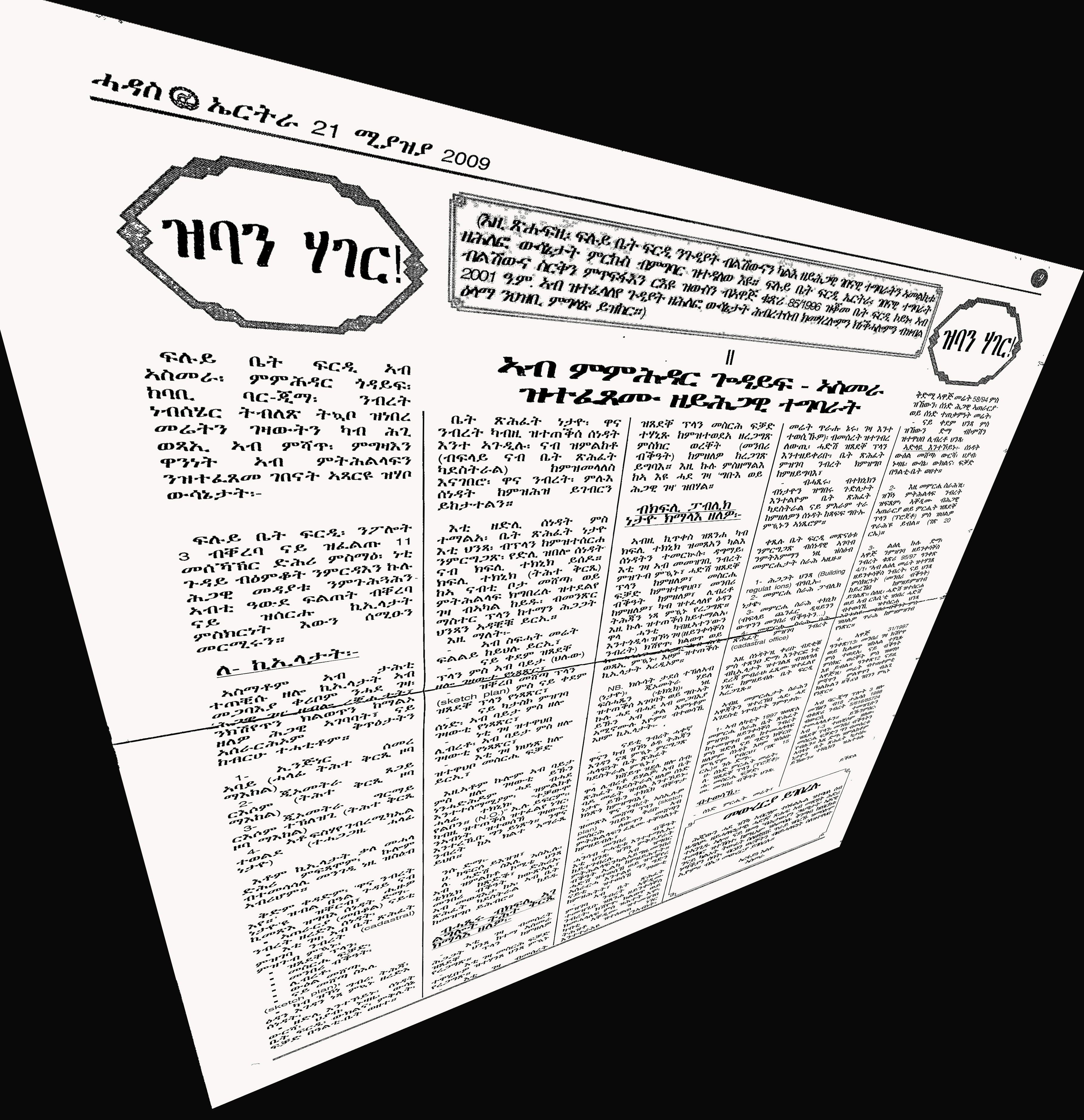 ​The Eritrean “free” press: A classic example of Orwellian Newspeak

Often times, media is described as the fourth pillar of government, the other three being the legislative, the executive and the judicial pillars. Media plays a crucial role in restraining government authority and ensuring the ideals of “checks and balances,” by shaping public opinion and by blowing the whistle when government power is abused.

In Eritrea, none of the four pillars is properly functioning. In fact, with the exception of the executive and the judicial branches, the other two pillars do not exist even at official narrative level. There is no form of media in Eritrea – understood here as outlets of free press not owned and controlled by the state. Since 2002, Eritrea does not have any form of legislative organ. Effectively, it is run without a functioning parliament or a national assembly, as it is called in some jurisdictions. The judicial branch is an enfeebled establishment. The executive branch by itself, shadowed by a most powerful head of state, cannot be considered a properly functioning organ. In short, the politico-legal situation in Eritrea is a one-man show, displayed in the form of the personal rule of Isaias Afwerki, as noted by Petros B. Ogbazghi.

The whole issue can only be understood in the context of the post-2001 deep politico-legal crisis that has literally crippled the Eritrean nation-state. As has been argued time and again, Eritrea’s experience is very unique. Eritrea has never seen any form of opposition political party since de facto independence in 1991. It has not implemented any form of free and fair elections. It is the only country in Africa (perhaps also in the world) ruled without any form of a constitution or constitutional framework – be it a written or unwritten social contract. As noted above, since February 2002, the country has not had a functioning parliament either. The transitional parliament (National Assembly) remains under prolonged “hibernation,” unilaterally imposed upon it by Isaias Afwerki, who happens to be also the Chairperson of the National Assembly – a situation, which is uncommon in many other jurisdictions.

Indeed, Eritrea’s predicament is peculiar. Contrary to established practice of civilized nations, Eritrea has never publicly published its annual budgets and/or records of public auditing. To my knowledge, there is no other country in the world that portrays all of the above strange but structural problems all at once, thus making the sad story of Eritrea exceptionally unique, even when compared with many other countries ruled by notoriously repressive governments. That is why I persistently say (at the risk of sounding repetitive): Eritrea is a bizarre example of “statehood” in the modern history of nation-states. Its government is now accused of (possibly) committing crimes against humanity, one of the three major crimes that are condemned by the international treaty that established the International Criminal Court (ICC).

According to the UN Monitoring Group on Eritrea and Somalia, the only country in Africa that offers a greater contrast with Eritrea is the once “failed” state of Somalia. This shall again provide a broader context to a general discourse on media freedom in Eritrea. As a matter of fact, between 1997 and 2001, there were a dozen of privately owned newspapers in Eritrea. When the government summarily closed all of them and arrested their writers and editors in September 2001, Eritrea soon became the worst country in the world for media freedom. The year 2001 represents the saddest episode of Eritrea’s short post-independence history. It was a period when the Eritrean government responded harshly against a certain reform movement initiated by senior government officials, who enjoyed overwhelming support of the fledging free press. The crackdown heralded the official establishment of the dictatorship of PFDJ that, with time, has degenerated to a totalitarian rule of Isaias Afwerki.

At the time of the unfolding crisis of 2001, I was in Asmara, working as Judge of the Central Provincial Court, witnessing first-hand the government’s  swift and very unsettling response to political dissent and the slightest stance of criticism, as portrayed by the fledging free press of the day. I know close friends, colleagues and former classmates who were summarily arrested in September 2001, simply because they provided wider coverage (in their newspapers) for the issues that were articulated by the leaders of the reform movement. Many of them remain in detention without trial, and many others have reportedly died while in detention. Now, for several years since 2001, Eritrea has been ranked consecutively last in the list of RSF’s (Reporters Without Boarders) annual media freedom index. And this is not exaggeration.

In the latest and most authoritative of reports on the
situation of human rights in Eritrea, a UN-mandated Commission of Inquiry on Human Rights in Eritrea (COIE) notes that the initial promises of democracy and rule of law were mercilessly suppressed and extinguished by the Eritrean government. In spite of some seemingly “good gestures” portrayed before the political crisis of September 2001, the government has now effectively created and sustained a repressive system of controlling, silencing and isolating individuals, by depriving them of their fundamental freedoms.

Suffocated by excessive control of information, necessitated by a deep sense of paranoia on the part of the government, Eritrea now offers a classic example of the state of free speech muzzled by the Orwellian concept of Newspeak. The COIE report indicates that in Eritrea even supposed intentions and conjectured thoughts are monitored systematically with a dire consequence summarized as follows: “Information gathered through the pervasive control system is used in absolute arbitrariness to keep the population in a state of permanent anxiety. It is not law that rules Eritreans, but fear.”

In spite of the sad state of affairs of the present time, Eritrea had a very proud history of media freedom that dates back to the 1940s, when almost all other African countries were still under one or another form of colonialism and/or external subjugation. Although Eritrea was also under such subjugation, the 1940s represent the most fertile Eritrean era of media freedom. With at least one weekly Tigrinya newspaper (Nay Ertra Semunawi Gazeta), edited by the most eloquent Eritrean writer of his generation, Weldeab Weldemariam (WeWel), this period was indeed Eritrea’s highest peak of free speech. The official organ of the Muslim League, the Arabic weekly Sawt al-rabita al-isslamyia that was launched in 1947 and edited by Sheik Yasinba-TuQ and Sheik Mohammed Osman Hayuti, similarly created a vibrant media and a room for proliferation of the national cause. Sadly, this was never to be emulated in Eritrea’s post-independence experience, except for the brief window of 1997-2001.

With its only university dismantled under the pretext of “decentralization of higher education,” Eritrea is a very sad story, not just for media freedom, but also for higher education – the twin sister of free speech. As once noted by Richard Reid, “obsession with discipline and unity has … contaminated the political process and society more broadly” to an extent that even family members no
longer trust each other when it comes to “sensitive” political issues.

Almost a quarter of a century since Eritrea’s de facto independence, the true meaning of free speech is yet to reveal itself to Eritreans meaningfully. That is why there is now a very common adage among Eritreans: that the only difference between the Derg regime (the last Ethiopian regime in Eritrea) and the current totalitarian rule of Isaias Afwerki is that the officials of the Derg used to speak in Amharic (the Ethiopian official language) while officials of present day converse in Tigrinya, a popular Eritrean vernacular with a de facto official status in Eritrea.

Under the pretext of defending the integrity of the state, the Eritrean government has made Eritrea “hell on earth,” as emphasized by Gerard Prunier. History teaches that no political system can sustain itself in such a self-destructive manner. And the wind of change is also already blowing, as was seen recently (on 26 June 2015) in the unprecedented mass rally of Eritrean diaspora grassroots movements that congregated in Geneva to condemn on-going human rights violations in the country, including the brutal suppression of media freedom. To the uniformed reader, it is important to remember that due to its long history of forced migration Eritrea is a country equally lived in its national borders and its vibrant diaspora communities that constitute a sizable part of the total Eritrean population. Although change may eventually come from within Eritrea, what happens in Eritrean diaspora communities has profound impact on political developments inside the country. That is why there is an urgent need to support diaspora-based grassroots movements, PEN Eritrea being one of them.

Finally, I note that the assertions I make in this piece emerge from a range of scholarly and practical (activist) contributions I wrote in the last 13 years of my exile. Those who are familiar with some of my previous writings may not notice anything substantially new in this piece. It was essential to re-articulate some of my long-standing assertions with a view to revisiting the sad state of free speech in Eritrea, on the occasion of the launch of this website.

Daniel R. Mekonnen, is a visiting scholar at the Centre for Migration Law, University of Neuchâtel (Switzerland). He authored Transitional Justice: Framing a Model for Eritrea (2009) and co-authored The African Garrison State (2014). He can be reached at danielrezene@gmail.com.