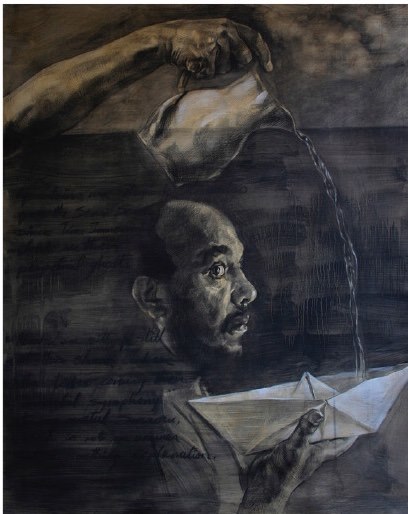 One of Eritrea’s best contemporary Artists, Ermias Ekube speaks with PEN Eritrea’s Mogos O. Berhane about his work, philosophy in art and exile.

Why “Faces of memories?”

Almost every work in this exhibition represents faces with eyes confronting the viewer. Most of the works on this exhibition are inspired by the idea of memory. Memory as a dominant force about
the lives of displaced people. Everything about ‘this people’ is defined by a context of memory. They are mostly asked about their past that shape the values of their experiences and memories in a new context. Because of that, they have to ‘refresh’ their memory all the time. Sometimes they refresh memories that used to be less cherished or suppress those were more valuable before. Slowly, a new kind of ‘memory’ starts to grow as an entity and becomes a solid partner of their new identity.

How do your works comment on current Eritrean issues?

As an artist from Eritrea all my experiences of being exiled comes from the predicaments in Eritrea. I am not skilled on that kind of commenting in
current situations. I missed a lot of information while I work on images that seems more important to my being and worth spending energy and time.
Most of my works lack this kind of direct comments. Mostly they try to put an image with layers of meanings rather than illustrate ideas. I am also
experiencing and sharing a life with fellow immigrants and the local people.

What do you advocate for in your art works?

I don’t think my works advocate anything. My job is image making. Some images could be created based on specific incidents but they do not provide
the final comments. Instead, I wish them to raise questions for each and every viewer or encourage further discussions among them.

How do you leave Eritrea? Any incident forced you to exile?

I left Eritrea in 2012. The obvious situation in Eritrea is enough reason to leave the country as anybody else. But as an artist, I have personal reasons
that forced me to flee. Above all, it was the scary and stringent censorship and lack of freedom of movement. Due to these reasons I was forced to
cancel many invitations to travel abroad for exhibitions and art in residence programs.

Any impact of being exile on your art work?

Of course, being exiled has many challenges. There is always a pressure for many changes that could shake all your being. Whether you like it or not.
It could be for your own advantage or the opposite. But mostly it takes time to reach that win-win situation as an exiled artist. Every situation added
up to your new way of seeing and thinking, since ‘it doesn’t kill you’, (is that Nietzsche?) or if you want to see it that way. But you lose something
and gain something else, it may be difficult to compare the things you have lost and you have gain.

Does your style or philosophy change?

I am not sure. I don’t feel I have a style or I may not believe in having a style. You can say that I used to paint in semi-abstract approach with
a rich color pallet when I was in Eritrea. Now, I am much into a very realistic black and white charcoal drawing. Many things have changed in my life
now. Those things which are more experiential than intellectual are changed. For example, though I don’t have a clear explanation so far, I feel that
my perspective about freedom or home or identity is changed. No one can define them for you. You experience them only in your own way. I think that
is all art for or about.

These questions are an extension of ‘Black life matters’. I was thinking a lot about this concept. It raises those existential questions, with the
symbol of egg, as vulnerability of life, examined by water and light. One of the famous quotes of a Nobel laureate Maria Wisława says it all- ‘Hearts
beat inside eggs’. It is all paradoxical for me that in this highly civilized time the value of human life is measured by the status, place, religion,
ethnicity, and so on. One can read between the lines in a news, ‘this time only 100 people died on the accident’ in another ‘in this catastrophic tragedy
2 people died and 5 injured’ and you see the latter incident becomes a hot issue in all mainstream media. That is the question.

Who are your biggest influences?

Influences vary throughout different periods and places; as a child my father’s metal and wood work tools awakened my interest in hand crafts and my
family were encouraging me in all my creative and academic activities. Later, the art school opened my scope wider in many ways to explore possible
techniques, knowledge and their meanings, especially, in the context of the western art tradition and history. After graduation, studying great artists,
poets, film makers and philosophers influenced my way of seeing and thinking a big deal.

Which current art world trends are you following?

I don’t need to follow any trend. I use whatever form or technique as long as that is suitable to a story I want to deliver. That is the advantage
of the contemporary art. Any kind of expression is accepted as long as it delivers a strong story in creative way.

How do you get in touch with other Eritrean artists?

That is the main problem of Eritrean exiled artists. I don’t know if there is any network. I have a personal contact with few of them but we don’t
do any networking which we really need in order to achieve our mutual goals as a group or as an individual.

What project are you working now?

I have attended some of your exhibitions in Asmara. Most of your works embody poetry. How do you relate the two?

I used to dedicate myself writing poems in a regular basis. I write with ambition to create images and paint with poetic ideas. At some point I start
including poetic texts that complement the painting both as idea and as visually supportive pattern. However, poems need not necessarily illustrate
my paintings.

How do you know you an art work is finished?

It is a bit difficult to answer this question. Every work of art has its own aesthetic and expressive logic. One of the most important thing in this
creative process is to follow this infinite logic with your intuition. That sense of intuition tells me when to stop. That feeling tells you that ‘if
you go further you will destroy the whole idea.’ That is when you should stop. But sometimes you may continue to work on it after long time, may be
when you get them back from exhibition.

*Mogos O. Brhane is PEN Eritrea’s secretary and can be reached at mogosmoj@gmail.com