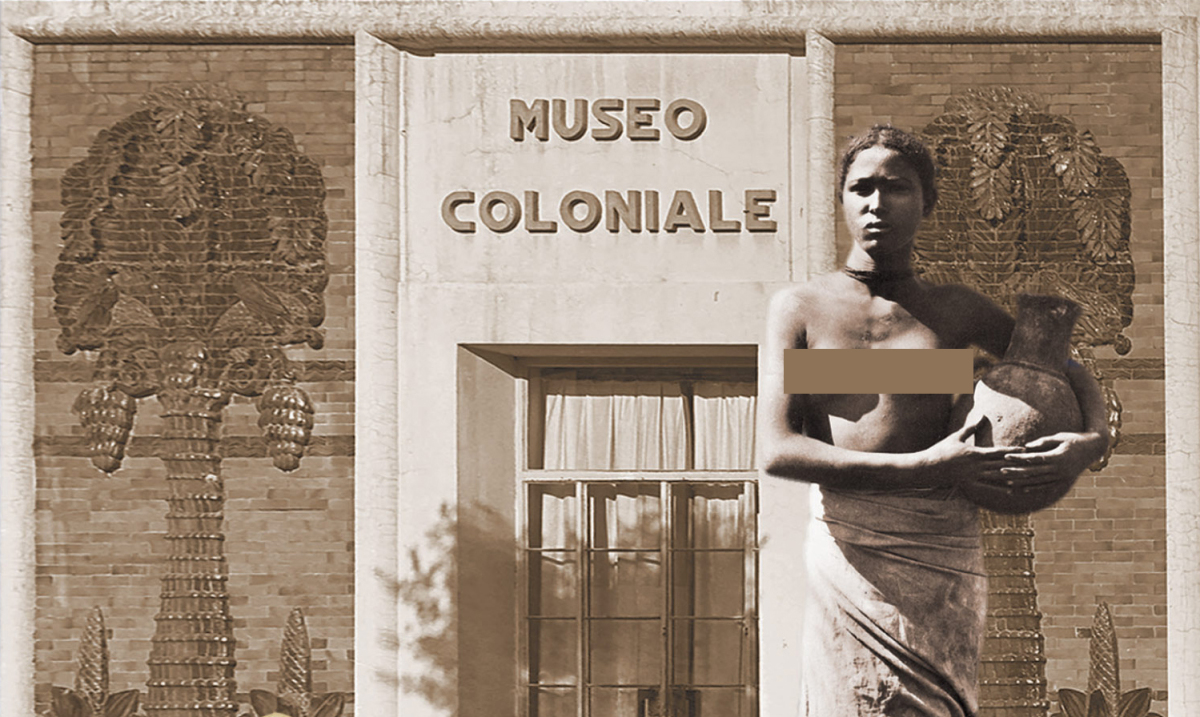 The Colonial Museum is Reopening in Italy and We Have Questions

Recently, the conversation on museums has been revolving around “restitution,” “compensation,” and “decolonization.” Even while most have failed to repatriate objects, many former colonial powers are beginning to acknowledge the damage they have inflicted on others. In the United States, there is a new National Museum for African American History and Culture on the National Mall. In Senegal, the Museum of Black Civilizations was recently inaugurated. Last year, French president Emmanuel Macron commissioned a report to outline the return of African heritage items to former French colonies.

But, not all former colonial powers are on board. Italy is doing exactly the opposite: it is planning to resurrect the Colonial Museum, Museo Coloniale, scheduled to reopen in 2020.

Italy seems to repeat or perhaps not fully understood its dark colonial history. In 1905, fourteen years after Italy declared Eritrea its “firstborn” colony, a formal institute for the study of said colony was approved at a conference in Asmara[i]. Scientists, government administrators, and the military had already been collecting information and appropriating land for decades, but the establishment of the Italian Colonial Institute marked the increasing institutionalization of this production of knowledge and power.

Around the same time, Eritrean cultural objects along with actual people were on display as part of a 1906 exposition in Milan. The Esposizione di Milano included an “Eritrean village” with children and adults in traditional attire and performing everyday tasks under the unethical gaze of Italian visitors[ii]. European expositions such as this one, sorts of human zoos, demonstrated a hierarchical, racist taxonomy to justify the colonial civilizing mission.

This context is important for understanding the Museo Coloniale (Colonial Museum) in Italy. Inaugurated in 1923 by fascist dictator Benito Mussolini, it housed thousands of items from Eritrea, Somalia, and Libya until it closed for good in 1971. Museums, expos, and research institutes were joint tools in the European colonial project to subjugate African peoples. And now, it has been announced that the reopening of the Colonial Museum.

The director of the Museo della Civiltà, who runs the museum under which the Colonial Museum will reopen, said that, “The goal is not to recreate… a propaganda museum nor a collection of memorabilia but to do something unmatched by telling the relationship between civilizations and also offering immigrants the opportunity to get in touch with their culture.”

It is puzzling that the colonial museum would “offer the opportunity” to destitute refugees, many from Italy’s own former colonies, who are trekking the Mediterranean only to find themselves to be treated as half-humans. This is without counting those who die at Italy’s shores or the previous generation, particularly women, who came to Italy, but never left the kitchen yet. What does it mean to “offer the opportunity” to immigrants (an already patronizing phrase) to see their culture on display in a sociopolitical context where they are discriminated against for it?

It is not coincidence nor is it news to anyone that the largest groups of migrants crossing the Mediterranean are from Italy’s former colonies of Eritrea and Somalia, being trafficked through another one of its former colonies, Libya. A colonial museum that does not explicitly name or seek to redress its complicity in that violent past and this violent present, is not one worth reopening.

This year, the Venice Biennale in Italy included an exhibition of one of the largest migrant boat wreckages. A Swiss-Icelandic artist chose a boat that became a mass grave for over 800 people in 2015 and decided to display it as Barca Nostra (Our Boat) at an international art exhibition. Visitors are still taking selfies in front of the current installation. This artist’s obscene actions and the audience’s reception reflect the West’s insatiable appetite for consuming black trauma. Even deaths become vulgar spectacle under the gaze of the West. This gaze is ever present in the relationship between the West and “the Rest,” including in visual representations in museums.

The way that historical museums as institutions tend to deal with traumatic memory employs a pedagogical language of distance, pastness, and transcendence. This makes invisible the continued presence of that trauma and the forces that continue to cause it. How does one exhibit a phenomenon (say, Europe’s exploitation of Africa) that is still ongoing? As Christina Sharpe asks as part of her profound theory of wake work, “How does one, in the words so often used by such institutions, ‘come to terms with’ (which usually means move past) ongoing and quotidian atrocity?”[iii]

Unless and until these problematics are recognized, there is nothing the Italian Colonial Museum or any other Western museum can do to ethically exhibit stolen cultural wealth. Western museums must first start pursuing a new relational ethics with African nations and museums that is grounded in restitution. The logistics of ultimate repatriation, of course, is a longer discussion.

The collection of the former Italian Colonial Museum is a valuable one that Italian scholars have been eager to have reopened along with the rest of the holdings of the former Italian Institute for Africa and the Orient (IsIAO)[iv]. As a researcher myself, I have also been eagerly awaiting the opening of these holdings – but not under these terms.

The fundamental questions remain: For whom is the Colonial Museum opening? For whose benefit?

Universalist rhetoric about a shared world heritage that belongs to all of us belies a very real global power imbalance. If it is truly shared, why is an estimated 90-95% of African heritage found in museums outside of Africa?[v] The approximately 12,000 items of the Colonial Museum’s collection alone are already triple that of the estimated holdings of national museums across Africa. The National Museum of Eritrea’s ethnographic exhibit is abysmally small and the stories that we could learn from the collection in Italy are full of possibilities.

The reopening of the Colonial Museum sets up both the owner and the narrator of the history and culture of former Italian colonies. The very least we are owed is the ownership of the dispersed, but very tangible, debris of our ancestors’ heritage.

[i] Giulia Barrera, “The Unhappy End of the Italian Institute for Africa and the Orient (IsIAO) and the Uncertain Future of its Holdings,” Critical Interventions, 10:1 (2016): 71-80.

[iii] Christina Sharpe, In the wake: On blackness and being (Durham, North Carolina: Duke University Press, 2016).

[iv] Giulia Barrera, “The Unhappy End of the Italian Institute for Africa and the Orient (IsIAO) and the Uncertain Future of its Holdings,” Critical Interventions, 10:1 (2016): 71-80.

[v] Lyndel V. Prott,  Witness to History: A Compendium of Documents and Writings on the Return of Cultural Objects (Paris: UNESCO, 2009).

*Timnet T. Gedar is a PhD candidate in African history at the University of Michigan. She holds a graduate certificate in Museum Studies and is interested in the intellectual and political history of the Horn of Africa, historical and ongoing decolonization, and radical museum practice. She can be reached at timnet.gedar@gmail.com.