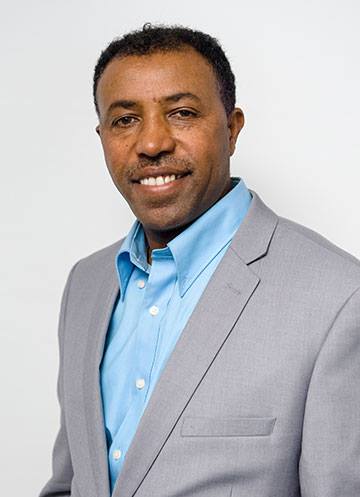 Reflections on the Beginning of Eritrean Free Press

Whenever I walk on the streets of Toronto from the subway station to where I work, I encounter people who distribute a free copy of the Metro newspaper. I don’t know whether it’s ingrained in my mind or my memory gets refreshed every day but I remember Setit— the first newspaper I co-founded in Eritrea. The newspaper I hold in my hand reminds me of Setit and the people who distribute Metro with their broad smiles remind me of the children who used to distribute Setit and other newspapers in Asmara. That nostalgic feeling always throws me back to the past.

About two decades ago, the Eritrean government issued a law that permitted private ownership of print media. It was the highlight of the year for many people like myself who wished to exercise our democratic rights and be part of the greater conversation in the national dialogue. Although print media has long history in Eritrea, this period was a beginning of another long journey.

Missionaries introduced the modern printing press to Eritrea in 1866. However, publication began to grow in 1891 only after Italy established Eritrea as its colony. After establishing print-press in Eritrea, the Protestant missionaries were also the first to start newspaper in Eritrea. The first Eritrean religious newspaper–መልእኽቲ፡ ሰላም። (Message of Peace)–started in 1909. But, expectedly the scene was soon took over by Italian propagandist newspapers that primarily serves the colonial agenda. The newspapers were mainly aiming for the Italians who lived in Eritrea then. The dominant topics of these newspapers were politics, sports and commerce. With the Italian educational policy of limiting Eritreans to 4th grade, Eritreans didn’t have a forum of their own to practice freedom of the press. The segregationist policy of the Italians, did not also enable them to take part in their own affairs.

This was later to change with the arrival of the British. The British Military Administration (1941-1952) started a newspaper in local language, Tigrinya. ናይ ኤርትራ ሰሙናዊ ጋዜጣ (The Eritrean Weekly News) was the official organ of the British that started in 1942. In many ways allowed Eritreans to write, debate and voice their opinions in their language. Its associate editor was Woldeab Woldemariam. The newspaper had a circulation of 5000 copies[i]. Moreover, Hanti Ertra and Wihidet Eritrea which was the Arabic version of Hanti Ertra were prominent newspapers in 1950s.

The once vibrant discussions in the newspaper was thwarted after Eritrea was federated with Ethiopia. Until Eritrea’s independence in 1991, electronic and print media were owned by the government and only served the purpose of the colonizer.

The long years of silence showed promising signs in June 1996. Implementation of the Eritrean Press Law (Press Proclamation No. 90/1996) was the beginning of a new chapter. I remember vividly reading Eritrea’s Gazette to digest the terms and conditions of that proclamation. The crucial contents were very vague and has a wide room for interpretation. For example in Part five of that proclamation, it says a journalist is not allowed to disseminate, “any document or secret information on the supreme interest of the nation and people, as well as national security and defense secrets,” but it failed to give the details. So, the interpretation of such clause will fall in the hands of the court which is not independent from the executive body. Criticizing a minister of defense or Internal Affairs for his/her ill-behavior, can be interpreted as an issue of national security in the eyes of some people. Similarly, according to the vague article, exposing corruption of some key actors in the government can also be construed as the journalist acting against the law. The officials of the government or the court will always have an upper hand in interpreting the proclamation in their own way. However, my wife and I as a team, and my two former friends Semret Seyoum and Habtom Mihreteab were not discouraged by the intimidating tone or vagueness of the proclamation or the potential risk to which we would expose ourselves. We decided to proceed with our research to start a newspaper. It took us about six months to put our findings on the table. Worse than the vague Eritrean press law, the findings of our research were very discouraging.

There was only one printing house in the country that could print the volume of a newspaper. That printing house was owned by the government. The printing cost was very expensive. It costed Nakfa $1.25 to print a single copy of a newspaper of a print run 3,000. There was only one distributor in the entire country and his area of distribution was limited to Asmara. The circulation of the government-owned newspaper—Hadas Ertra—was only 10,000 while the population then was 3.5 million. Though this paper was sold for Nakfa $0.50, half of every printed issue returned unsold despite being distributed for free in most offices.

We were really anxious about the awkward position we would face in dealing with the government-owned printing house. We were concerned about the poor reading habits of our people. We were puzzled about why the printing cost was so high and wondered whether we could afford it. We were also disturbed by the poor distribution mechanisms in place. According to our projections, we wouldn’t make any profits until we hit at least the third anniversary of our paper. Nevertheless, we were determined to dive in and launched ourselves to start raising funds.

I shared the idea with my father. I explained to him with excitement and passion the detailed results of our research and the amount of money I needed to fulfill the dream I had of establishing a newspaper. My father was apprehensive. “First, this is not a profitable business and, second, it is a risky business,” he said. “This government is not ready to be criticized. You are young, and there are so many things you don’t know.” He pinpointed so many layers of obstacles that I hadn’t seen before or uncovered in our research. I had never debated with my father on any issue to that extent. I was frustrated because I ran out of convincing arguments. He didn’t want to encourage me and at the same time, he didn’t want to disappoint me. So he gave me a one-room office and a small amount of money to start with.

My friends were also not successful in raising adequate funds. So we decided to start small by opening our first office in Gejeret, Asmara. The application process was simple and straightforward. I applied for a permit from the Ministry of Information to publish a newspaper as an individual. We named our newspaper Setit after the only river in Eritrea as we wanted our newspaper to flow like a river without interruption. We agreed to print 5,000 copies to reduce the unit price and sell the newspaper for Nakfa $1.25 to cover our expenses. If we printed 3,000 copies, we would have to pay Nakfa $1.25 per copy. But if we printed 5,000 copies, each paper would cost Nakfa $1.00.

We printed our first bi-weekly issue on August 21st, 1997. That was the beginning of the first independent newspaper in Eritrea. We recruited shopkeepers and children who would like to work on commission in distributing the paper. Though we believed that the content of our paper was rich, entertaining and informative, we were worried about whether we could sell the copies. The distribution mechanism we had in place was weak and the price was high. Our distribution was limited only to Asmara and our price was more than double that of Hadas Ertra.

It’s challenging to be a pioneer. You have no one to refer to. You are entirely on your own. So we had to test the waters ourselves, learn from our mistakes and be ready for surprises—good or bad. It’s an emotional rollercoaster.

To our surprise, around 11:00 a.m., the children who took 50 copies each to sell on the streets started to come back one after the other with cash in their  hands and asked for more copies to sell. The shopkeepers kept calling us to get more copies. The 5,000 copies that we expected to sell in two weeks were gone in just one day. It was a most delightful day.

We received several calls and letters of encouragement as well as complaints about the price. We accepted the comments and dropped our price to Nakfa $1.00 just on the next issue. Our circulation grew month after month as we expanded our distribution system to all major cities of Eritrea. 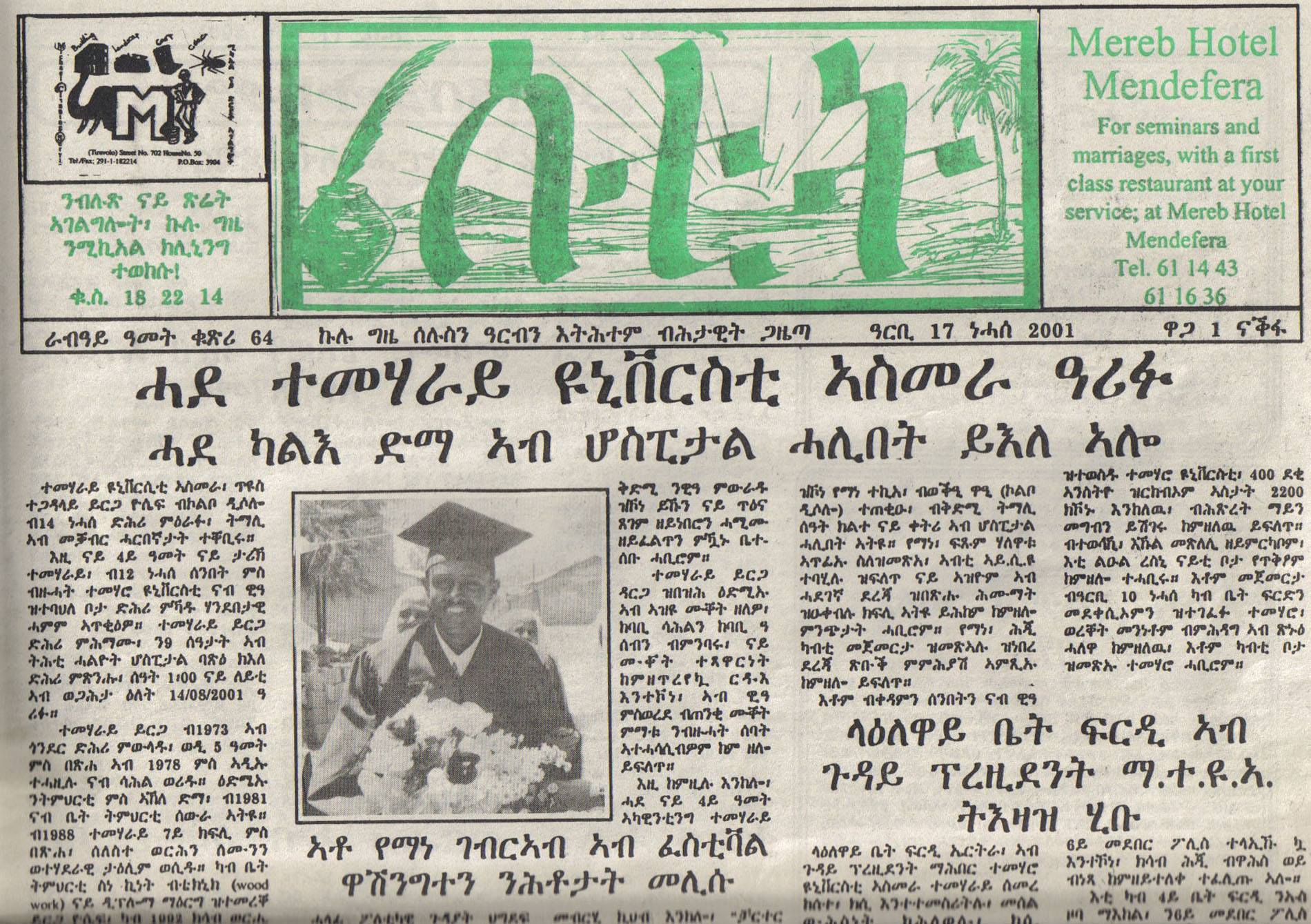 I remember every step of our way that led us to both success and destruction simultaneously while holding the Metro Newspaper in my hand. Unfortunately, Setit was banned on September 18, 2001 with the rest of the independent newspapers. Two of my colleagues and several innocent journalists from the other newspapers were thrown into jail. According to recently revealed documents, only five of the 12 journalists are alive in deteriorating health in the worst dungeons. Many others and I fled the country.

I live in Toronto now but every day I travel in my thoughts to the past—my journey with Setit. I am optimistic that one day, Setit will start flowing again in Eritrea and flow just like the Eritrean Setit river.

[i] See Ghirmai Negash. History of Tigrinya Literature in Eritrea: Oral and Written 1890-1991.

*Aaron Berhane, former chief-editor and co-founder of the first independent newspaper Setit is now living in Canada. Aaron continues to work
in media and edits a newspaper Meftih and recently launched a radio program. The author can be reached at aaron@meftih.ca.