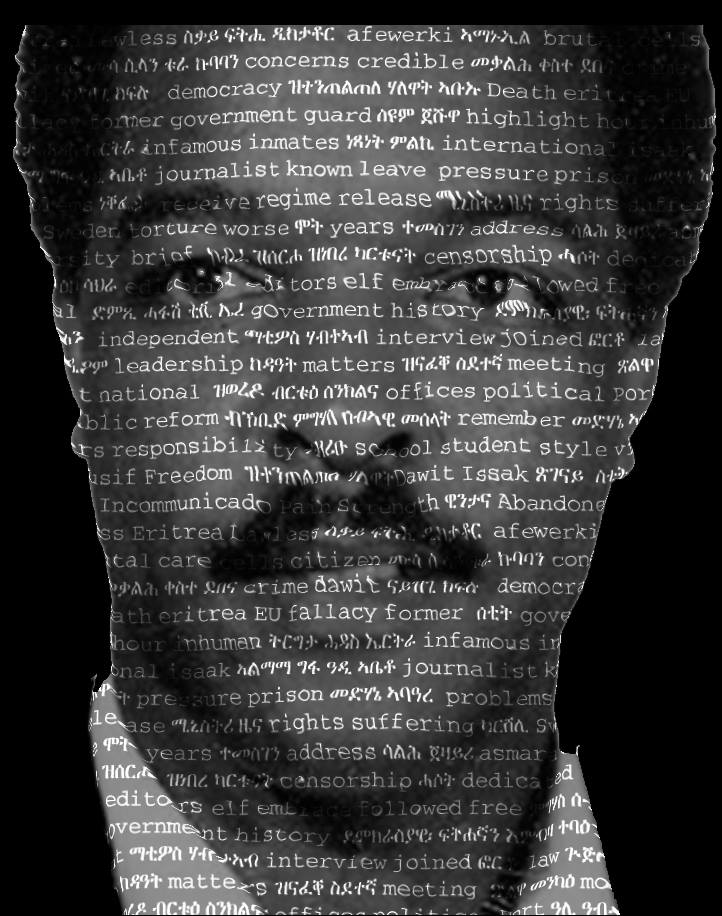 A prisoner of conscience celebrates his 51st birthday behind bars in one of Eritrea’s most secretive gulag. Dawit Issak, an Eritrean-Swedish journalist associated with the short-lived Eritrean press, has spent the past 14 years of his life in Prison.

Born on October 28, 1964, Dawit Isaak spent his early years in Asmara prior to immigrating to Sweden during the struggle for Eritrean independence. It was there that he was married, started a family, had children and became a naturalized Swedish national in 1992.

Dawit was passionate about arts and made efforts to contribute something to his mother-tongue and culture. While exiled, Dawit published his first book ባና፤ ታሪኽ ፍቕሪ–ሙሴን ማናን (1988) (Bana: The Affair of Mussie and Mana) in Sweden. The novella touches many cultural elements of Eritrea and is entirely written in verses.

After his return to Eritrea, Dawit was actively engaged in the cultural revival of his country. He was frequently writing for the media, like the national radio and some of the periodicals such as Hiwyet. His short story “እተን ሰላሳ ሽሕ” (The thirty-thousands) that was serialized in the national radio at the early days of independence was widely followed and highly discussed. It is a story of one mean and close-fisted barber who stashes some cash in barber-chair only to find them invalid as the currency changed after he returned to collect them after long years. Dawit also exerted himself and helped co-founded Shewit Children’s Theatre with the late Isaias Tsegai and the journalist Fessaheye ‘Joshua’ Yohannes (a co-worker in Setit who is now presumed to have died while in custody).

As the former Setit editor-in-chief and co-owner, Aaron Berhane tells, Dawit joined the newspaper along with Joshua in few months after it was launched. He bought equal shares and became board member and co-owner until the final ban on September 18, 2001.

No one would have anticipated the soft-spoken and family man Dawit was to end up being locked up for charges of treason against the State of Eritrea. Not certainly his family, not even his colleagues.

Aaron Berhane, recalls Dawit as being a calm personality. In times where the politics of dissent and calls for reforms were the regular topics, Dawit would talk about arts. Aaron recalls Dawit’s preferred beat was mostly in the arts — covering apolitical issues. It was because of this reason that when journalists of that time chose to use pennames on issues pertaining to democratization, Dawit had always used his real name, maybe because he thought that his articles couldn’t get him into trouble.

Alas, however, Dawit was one of the first arrested during the September crackdown , where security forces of the Eritrean government took him away to an undisclosed location, never to be heard from again until 2005, when he was released for 2 days, and then he was taken back into prison.

Today, Dawit Issak is one of the most famed journalists behind bars, perhaps on the virtue of his Swedish citizenship. His name is repeatedly mentioned all over the international media, he’s been the recipient of one of the prestigious awards in freedom of expression circles, such as the Golden Pen of Freedom, the Kurt-Tucholsky-Prize and the Anna Politkovskaya award among others.

Swedish Essayas Issak, Dawit Issak’s younger brother now spends a considerable amount of his time campaigning for his brother’s release, and going around receiving those accolades on behalf of his brother.

“The first time we heard that he was imprisoned, I wasn’t sure what was going on, and we certainly didn’t think it would last long. We just thought it was a  misunderstanding that would soon be settled in a court of law and my brother would be released. But days turned to months, and months to years,” says Essayas.

His incarceration is complicated in the sense that even 14 years after his imprisonment, the charges against Dawit, or his colleagues for that matter, haven’t been disclosed at all.

Issak’s family has also been subjected to many trysts in their quest to have Dawit released. The first of such kind, Essayas recalls was when the family were contacted by a fraudster who also duped a BBC journalist. The individual claimed that he was imprisoned with Dawit, and that he managed to escape after digging a tunnel prison-break style using a fork.

“He got in touch with us, and told us that he was then in Uganda and still has connections to the prison guard that had access to Dawit. He then asked for some medication, money and a camera to send to the guard. I doubted his claims, but I didn’t want to risk the life of my brother if his claims were true, so I sent him what he asked,” Essayas said.

Another time, Essayas and the committee of volunteers that work to campaign on behalf of Dawit were contacted by a certain Maria Cedrell. This individual claimed to have contacts with an Eritrean general and asked for 1 million dollars to have Dawit released. She instructed Essayas to fly to Amman, Jordan where she was supposed to fly in with Dawit from Asmara.

“We waited for 3 days, and nothing happened. Then we went back to Sweden,” recalls Essayas.

Essayas’s efforts to have his brother released is also further hampered by the fact that Dawit Issak’s family is polarized as far as the situation of Dawit goes. His children and wife, until quite recently thought the campaigns to have him released were exacerbating matters and the release of their father so didn’t understandably wish to lend their voices to the campaign. Another brother of Dawit justifies the Eritrean government actions and is wary of campaigners who work to have his brother released.

“I’m not very optimistic about a lot of things, but I do not want to regret not having tried at least,” Essayas concludes.

“Dawit who? No such person here…”
Anyone who asks after those who were arrested in the press crackdown on September 2001 is usually at the receiving end of a reply that oscillates between an eerie silence or a scripted reply to stop meddling in the affairs of the young state.

CPJ’s former Africa Desk Coordinator Mohamed Keita recalls one such instance of him reaching out to the Eritrean Information Ministry to inquire regarding the jailed reporters. His call was answered by Amanuel Hadgu, the head of the PR unit at the Ministry of Information at that time.

“I am not aware of any imprisoned journalists in our country. Eritrea is very small and the names you have called I would have known if they were in our prisons, you have wrong information,” Amanuel said in response to Keita’s inquiries about the jailed journalists.

Keita recalls that Amanuel also wanted to nonetheless point out that the only Eritrean journalists that he’s aware of being imprisoned are those Eritrean journalists being held in Ethiopia, referring to Eritrean TV-staffers that were arrested by Kenyan authorities and handed to Ethiopia.

The head of Political Affairs of the PFDJ, the ruling party, Yemane Gebreab, one of the few media-friendly government officials in Eritrea has told Swedish journalists who asked the whereabouts of Dawit that he doesn’t understand the justification or obsession that people in Sweden have with an Eritrean citizen.

Dawit’s international accolades and the pleas of his family seem to have had very little effect on his jailers. As far as the Eritrean government is concerned, it is almost as if Dawit Issak never existed.

Dawit has just celebrated his 51st birthday and his 5149th day in prison. He might get to celebrate turning 52 next year, behind bars, if the winds of change don’t blow in Eritrea.

After all, no one knows if he’s alive, still sane, or dead except his jailers.

*Bealfan Tesfay is an exiled Eritrean journalist who currently lives and works in USA. In Eritrea, Bealfan was a reporter for the state-owned English newspaper, Eritrea Profile, a producer for Eri-TV, and later an Editor of shabait.com, the official government online news portal. From 2012-2015 He was working as reporter for Bloomberg News; currently is a social-media editor for a think-tank. He can be reached via his Twitter handle; @Bealfant