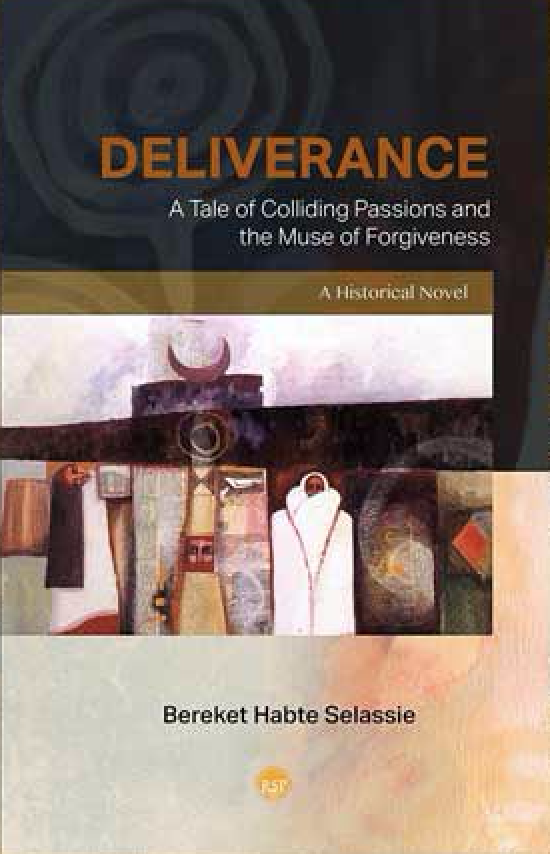 Bereket Habte Selassie’s Deliverance: A Tale of Colliding Passions and the Muse of Forgiveness (2017) is a novel based on the recent history of Ethiopia during which the last emperor was dethroned in a bloody revolution followed by a military
rule (1974-1991) and the current ex-rebel turned government rule of the country (1991-).

The main characters are members of the feuding political groups – EPRP (Ethiopian People’s Revolutionary Party) and MEISON (All-Ethiopian Socialist Movement)
– on the outset of the revolution and now veterans of whom some hold offices in the state. The major political groups that shake the monarchy in the
early 1970s are side-lined by the more organized military albeit lacking in a clear vision for the country. As the military entrenched its grip on
power, MEISON lends hand to the military in drawing a political program while EPRP unsuccessfully takes arms to wage gorilla war. After EPRDP, a coalition of rebel groups that fought against the military rule in 1970s and 1980s, takes over power, the remnant veterans of EPRP try to organize themselves in an effort to bury the hatchet and reconcile the people of the country.

In the forward of the book, Bereket gives writers a duty similar to “…one that is followed by people with an acute sense of right and wrong who
deal with the reality of a fait accompli creatively while maintaining a modicum of moral integrity.” He further indicates that he had gone through
a series of moments in writing the novel, one being that of Cervantes’ to “let loose the wings of the imagination.”

Taking Cervantes’ statement at heart, Bereket tries to rebuild the elusive past and reflects on the irrational decisions humans take. His fictional devices,
however, take after some elements from Fielding’s Tom Jones as his authorship intervenes to discuss his narrative with the reader; and most
importantly he makes use of a foundling character whose subtle relevance to the narrative and important issues discussed in the novel play significant
role.

According to Historical Novel of Georg Lukács, there are two ways by which thinkers would weigh the effects of revolution. One is to dwell in
the idea of organic past which is free of the chaos, the degradation, the anarchy and the collapse of ideas that the revolution brought about. The
other is to acknowledge the tragedy the period resulted in and advance the idea of progress through its negation to a new level. Bereket’s endeavour
in Deliverance certainly acquiesces with the second.

The juxtaposition of the characters Saba, a teenage revolutionary, and Reverend Abebe, her father, clearly reflect Lukács’ second point. Saba, a high school
student revolutionary, fires up the crowd at the provincial city of Harar during a funeral ceremony of a murdered young and popular teacher. In her
speech, Saba accuses the Police Chief and the police in general for the murder of the teacher and for the tortures the police subjects protesters,
including her. The Police Chief subsequently orders the arrest of her father, who is a protestant church priest, falsely accused as a sympathiser of
the student riots. Far from it, however, the priest’s advice to his daughter was to forgive and love those who hurt her and eventually bring them to
her side. Saba’s rage and defiance in front of the police, which appear to be loud but by no means boisterous, serve to her father’s release from the
jail. This, however, is muted as Bereket lays it side-by-side with the priest’s sermon at his church and his advice to his daughter as an undercurrent
force to carry his message of reconciliation, after acknowledging the misdeeds, to the end.

Bereket’s end project in this novel, from the outset and as its title suggests, is deliverance by way of forgiveness and reconciliation. To explore this
intent in the novel Deliverance, it would be relevant to quote from Edward W. Said’s Beginnings: Intention and Method. In an effort
to illustrate the enabling condition and restraint of a novelist’s inventiveness, Said formulates the terms authority and molestation.
The notion of authority, in general terms, is the power of an individual to initiate or begin so as to add to what has been there previously
with a control over issues and maintaining the continuity of the course of the initiative. “And molestation occurs when novelists and critics
traditionally remind themselves of how the novel is always subject to a comparison with reality and thereby found to be illusion.” (1985: 83-84) According
to Said, these two are inherent and inescapable qualities in the works of a novelist.

If we zoom into Bereket’s Deliverance, applying Said’s terms authority and molestation, we see the following. Bereket begins
by sieving elements of recent Ethiopian history with a control over what to add to it and what has already been known to all so as to ensure the continuity
of the spirit of the revolution whose ideas collapsed too soon. His authority of inventive initiative is, for instance, manifested in the creation
of the group ex-revolutionaries namely The Union of Veteran Fighters for Justice. By the same measure of molestation that Said suggested,
this group and its activities would inevitably be compared to the reality in the ground. The unripe conditions in today’s Ethiopia for such groups
precludes Bereket’s project of deliverance in the novel as much as it is so in reality. I say in the novel because reconciliation among the old feuding
political groups without any clear role of those in power would realise nothing but initiatives that are nipped in the bud or so close to ‘illusion’
in Said’s term. The continuity of his initiative, however, is ensured with what Fikre, one of the members of the union, at the end of the novel attests
that he was “wedded with the idea of peaceful dialogue and reconciliation among all the contending forces.”

Bereket who held office in the state and took part, directly or indirectly, in the events of the revolution can be considered as artist Diego Velázquez
and the subject of the painting Las Meninas. In authoring Deliverance in which he was part of or to which he was privy, he acts as
an agency and agent of the work he produced. That, therefore, makes the work an historical novel as much as it is contemporary begging for lending
ears to those who have politicked for four decades and equally those in power.

The dissonant and disharmonious reading of the novel is suggestive of Bereket’s intent in employing the magic realist implied in the forward for the novel.
However, more discernible is the realist mode as in Fielding’s Tom Jones wherein the author’s interventions are witnessed profusely.

Bereket has employed sub-plots which symbolize important notions, qualities of personalities who played significant role during the revolution and its
aftermath. The foundling who is rescued by a monk exactly during the time the throne was ousted and who grows later to adhere to the idea of embracing
Eritrean refugees as Ethiopian citizens signifies the country Ethiopia and/or the Ethiopian ideal. The monk whose name is revealed, at a later stage,
as Aba Amanuel Admasu, in the same manner as General Aman Andom (who first took the responsibility of leading the military committee to rule the country),
takes care of the foundling. And both of them, in the same manner of violence, are killed in a cold-blooded murder. Moreover, the foundling and the
country are handed over to be taken care of by committees. Such parallels are means by which Bereket thickens his plot and gives nuances to his narrative.

In a number of cases, foreign psychiatrists are brought in to counsel and cure pent-up emotional and mental problems from which the ex-revolutionaries
suffer. In addition to that, the revolutionaries’ foreign education – especially of French education – is highlighted to the extent of suggesting refinement
and quality for high regard. This seems a bit demeaning to home-grown solutions and wisdom which is represented in the novel only by either traditional
priestly education and characters whose significance in the narrative to the project of reconciliation is so minimal.

As much as one with a penchant curiosity in the history of the Horn of Africa would read the novel with great interest, the editorial work it went through
before its publication would reduce that interest. It has neither gone through a rigorous editorial fine-tuning for coherence and consistency nor through
a significant copyediting. This is not up to the standards of The Red Sea Press which is well-known for the merits of its previous publications.

You can order the book online from: http://africaworldpressbooks.com/deliverance-a-tale-of-colliding-passions-and-the-muse-of-forgiveness-a-historical-novel-by-bereket-habte-selassie/

*Tedros Abraham is treasurer of PEN Eritrea and can be reached at tedros@peneritrea.com