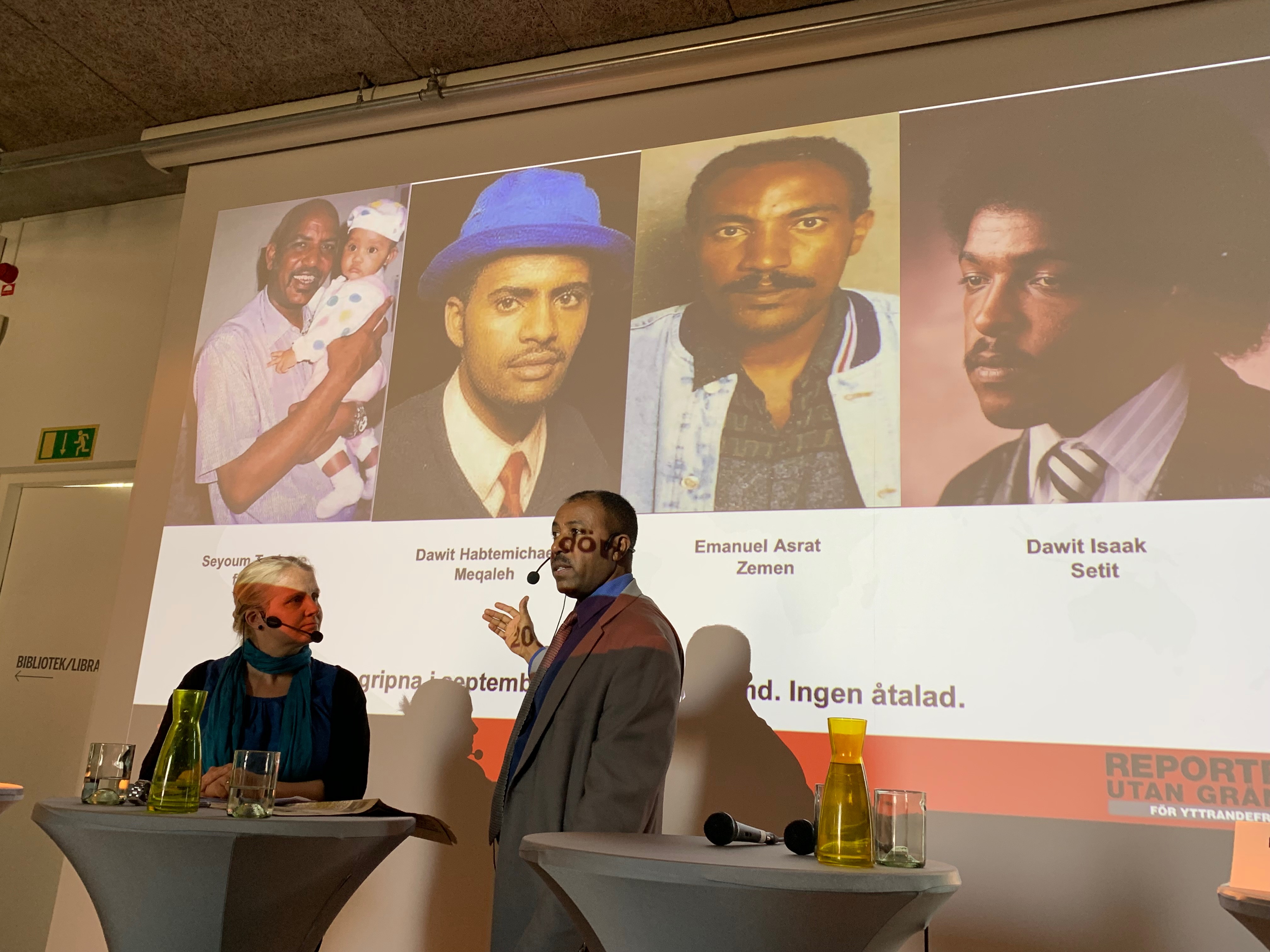 “Yesterday was a sad day for me and many Eritrean journalists. We lost a hero, a fighter, a fighter for the freedom of the press. A man who founded a newspaper to fight for justice, a man who was never afraid to express his views, a man who was a voice for the voiceless.”

Aaron Berhane wrote these words on March 28th, in an obituary about his colleague and competitor Milikas Mihreteab Yohannes who had just passed away.

Tragically, the same words could now be used about Aaron himself.

May 1st, 2021, Aaron Berhane, editor of Setit, Eritrea’s first independent paper, died from COVID-19 in Canada. It is a great loss in so many ways. During his memorial this weekend numerous testimonies described this warm hearted and dedicated man. People spoke in tears.

Like so many Eritrean journalists Aaron had to go into exile after the brutal clampdown by the Eritrean regime in 2001. Aaron would, in his gentle and humorous manner, tell the story of how he and some friends came up with the idea to start a newspaper in Eritrea. He was just about to turn 28 and his country had recently won its independence after 30 years of fighting against the regional superpower Ethiopia. There had never been any free press. It has all been state-owned media outlets with their robust propaganda.

“Perfect condition, wasn’t it?” Aaron would say with a smile.

After making a survey and a plan Aaron managed to talk his father into lending a bit of support. Initially his father was reluctant to support his son justifying, “Not only it is not profitable, but very risky business too.”

Finally, he convinced his father and lent them a room as their make-shift office.

They named the paper Setit after the famous river on the Eritrean border, a river that does not dry up. This was in August 1997.

For the first issue they printed 5 000 copies and thought they would last for two weeks. To distribute Setit, Aaron and his friends, had gathered a group of youngsters to sell the papers on the streets of Asmara. Each went out with a pack of papers that first day. And they came back for more. And more. All the papers were gone in the first day.

“It was a most delightful day”, Aaron would write later.

Eventually, Setit became the biggest newspaper of Eritrea with a circulation of 40 000 at its peak. Four times bigger than the state’s official paper. And soon others – like Milkias Yohannes whom Aaron Berhane eulogized – would follow the example and start newspapers in the young nation on the Horn of Africa.

This all came to an end 18 September 2001. Since that day all independent newspapers are banned in Eritrea by the regime led by President Isaias Afwerki. In the spring of 2001, a group of prominent Eritrean leaders (often referred as G-15) wrote an open letter to the President demanding that the promise to hold free elections be honored. They were members of the ruling party including the Vice President Mahmoud Ahmed Sherifo and the former Foreign Minister Petros Solomon, among others. Aaron Berhane published the open letter in Setit 5 June 2001. He was editor-in-chief. He knew it would be tough. During that summer he was taken in for questioning time and time again.

In the morning of 18 September, Aaron had his mind set on how to cover the events in America after 9/11, when he was listening to the morning news on the radio. That changed the life for him, and so many thousand Eritreans. The Government announced that the politicians who had signed the open letter were arrested. And that all independent newspapers were banned. The papers remain banned to this day and the politicians have not been seen.

Aaron and his colleagues immediately gathered to discuss what to do. He feared for the worst, but some of his colleagues thought it would blow over. After that day Aaron never stayed at home. But some of his colleagues did. And 23 September the regime started arresting journalists. Aaron’s friend and colleague at Setit, Swedish-Eritrean Dawit Isaak was one of them. The journalists (including freelancers) who have been incarcerated in connection with the press crackdown of September 2001 are: Amanuel Asrat, Idris Said Aba’Are, Seyoum Tsehaye, Yousif Mohammed Ali, Said Abdelkadir, Medhanie Haile, Dawit Isaak, Dawit Habtemichael, Matheos Habteab, Fessaha “Joshua” Yohannes, Temesegen Ghebereyesus, and Sahle “Wedi-Itay” Tsegazeab. Many of them were detained on the 23rd of September 2001 while others followed subsequently. None of them have been charged and majority are believed to have died of poor conditions and lack of treatment. The Eritrean regime, however, never clarified their fates and routinely declines to comment on.

Aaron Berhane was an important and tireless voice advocating their cause and he showed that a free press will not be silenced. After getting asylum in Canada he started a newspaper there too: Meftih (meaning “key” in Tigrinya). He would not stop writing and he taught journalism to a new generation.

I contacted Aaron over a decade ago asking him to do a portrait of his colleague Dawit Isaak for a book with translations of a novel, a play and articles from Setit written by Dawit. Aaron set to work immediately. But we did not meet until eight years later in Ghana where an English-French translation of Dawit Isaak’s book “Hope/Espoir” was launched at the UNESCO Press Freedom Conference. Aaron’s warmth reached me instantly. Later he came to Sweden where he spoke at public meetings, gave numerous interviews, met parliamentarians and the Swedish Foreign Ministry talking about how they have handled his friend Dawit’s case. Polite, but very firm and direct, he criticized the silent diplomacy Sweden has used.

He also met Dawit Isaak’s family living in Sweden. He knew better than most of us what exile means. His family could not get out of Eritrea and reunite with him for seven years after he managed to flee. He told me how his youngest son did not recognize him by then. Aaron had to go to the next room and make a call. His son immediately recognized daddy’s phone voice.

It really hurts to know that voice has now gone silent.

*Björn Tunbäck is Swedish investigative journalists who has been spearheading the campaign for release of Eritrean-Swedish journalist, Dawit Isaak. He is board member of Reporters without Borders (RSF/Sweden) and can be reached at: bjorn.tunback@gmail.com