By staff in literary events and reviews on October 11, 2017
No comments

PEN Eritrea is pleased to announce the launching of its new publication, an edited volume, entitled Uncensored Voices: Essays, Poems, and Art Works by Exiled Eritreans.
The book is the first major publication by PEN Eritrea, which was conceived within its bigger mission of promoting literature and freedom of expression.
The book will be officially launched on 11 October 2017 at an event hosted by PEN Austria in Vienna. The publication of the book was made possible
in collaboration with sisterly centers: PEN Austria and the Swiss-German PEN Center. 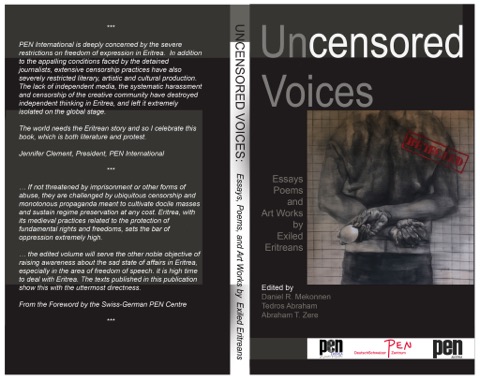 Starting with Ghirmai Negash’s seminal essay that envisaged the trajectory of the literary scene in the early years of independence, the essays in the
volume document the steady decline of independent thinking and freedom of expression. The book also comprises first-hand accounts of the perilous Sahara/Mediterranean
journey by the contributors, and their respective struggles in adjusting to life in their host countries.