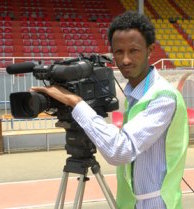 Eritrean filmmaker Tesfit Abraha has spoken out about the repressive apparatus at the Eritrean Ministry of Information where he has worked as a cameraman for 15 years in an interview he gave to Radio Wegahta. Tesfit  has made a name for himself in the Eritrean art circles as the writer, director and cameraman in the production of more than 40 films and hundreds of music videos.

Tesfit Abraha is prominent both at the ministry as one of the key cameramen assigned in the production of news and documentary shows for ERI TV and in the Eritrean film circles as a writer and cinematographer of more than 40 films and 600 music videos.

Recently fleeing to Ethiopia in January 2017 to escape persecution related to a recent government crackdown on YouTube affiliated music video makers, Tesfit Abraha spoke at length about the stifling atmosphere at the Ministry of Information, where he had been repeatedly harassed and arrested upon the orders of the former information minister, Ali Abdu for more than three months at Asha Golgol detention camp. Tesfit was also jailed for having a second job as a filmmaker (which is considered an offense at the ministry) after a heated argument with Asmelash Abraha, director of ERI TV. On the aftermath of the 2013 coup attempt in Asmara, Tesfit was arrested along with two fellow cameramen on the suspicion of relaying  photographs of tanks of mutineers who surrounded the Ministry of Information compound, demanding the implementation of constitution and the reinstatement of the rule of law in the country.

(Pic. The photograph of one of the mutineer’s Tank that caused the arrest of Tesfit Abraha and two other photographers at the ministry.)

The journalist and filmmaker has also stated in detail about various webs of nepotism and repression that makes daily work at the ministry challenging. Tesfit sketched in his interview the thread of security inside the ministry, where selected employees are made to spy, report and intimidate fellow colleagues in exchange for promotion and resource benefits. He also spoke of specific government officials like Solomun Dirar, representative of the ruling PFDJ party, who, on a general meeting with ministry workers, gave a warning of death punishment to the convened employees should they fail from their duties.

The recent arrests of popular music video makers that led to Tesfit’s escape is related to foreign currency revenues the artists earned without the acknowledgment of the government, according to his interview.  The arrested local artists include Merhawi Meles, writer and director who has produced more than a dozen films and a prominent music video producer; Daniel Abraham, an acclaimed film director and writer; and Yonas Solomon, cameraman and owner of Yonan Video production.  The arrested also include a visiting team of LYE Tv, a YouTube distribution company from Germany, led by the owner, Yonas Debass; editor Efrem Mebrahtu; and an unnamed female staff. They all remain imprisoned without formal charge since their arrest in early January.

We contacted Tesfit after this article was initially published. We learned from Tesfit that he fled the country two weeks prior to his planned wedding day.

*Yonatan Tewelde is PEN Eritrea’s webmaster and graphic artist; he can be reached at yenetam@gmail.com