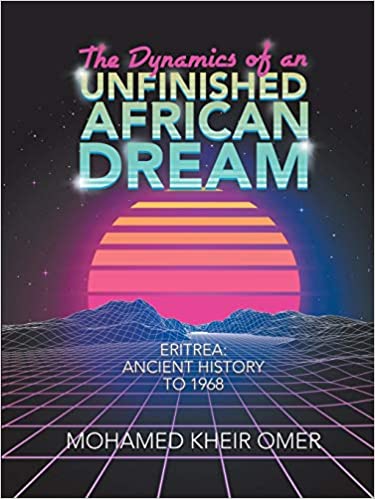 Book Review: The Dynamics of an Unfinished African Dream

The title of Mohamed Kheir Omer’s book, The Dynamics of an Unfinished African Dream, orients the reader to the activist ethos of his work. Though it is primarily a work of historical analysis, it also connects history to social change by explicitly reflecting on the meaning of various historical phenomenon for a contemporary Eritrea in crisis. It summarizes much of the existing Eritrean historiography for a lay audience, while also contributing to a reorientation of the mainstream Eritrean narrative by integrating marginalized sources.

The book contains two main parts: part I on ancient Eritrean history until 1958 and part II on “The Need for New Forms of Struggle” from 1958 to 1968. This periodization is already a slight departure from mainstream Eritrean scholarship, where Eritrean history is often periodized by eras of rule. For example: pre-colonial history until 1891; the Italian period (1891-1941); the British occupation (1941-1952); Ethiopian federation (1952-1961); and the armed struggle for independence (1961-1991); with important markers in the latter period being Ethiopia’s official annexation of Eritrea in 1962 and the formation of the EPLF in 1973. Omer’s re-periodization of Eritrean history is a refreshing way to emphasize the historical agency of Eritreans rather than the ruling government of the day. He chooses 1958 as the dividing marker between parts I and II of the book because it is the year that exiled Eritrean activists in Sudan formed a clandestine organization to work for Eritrean independence – the Eritrean Liberation Movement (ELM). The book ends in 1968 because it marked the moment when the structure of the Eritrean Liberation Front (ELF) began to breakdown and splinter guerrilla groups began to form. This breakdown would usher in a new form for the struggle for independence, which Omer seems to imply has a conspiratorial nature. We will have to wait to see this unfold in his forthcoming book that covers Eritrean history from 1969 to the present day.

To cover Eritrea’s “ancient history” in a first chapter is a nebulous and almost impossible task but recognizing this, Omer provides a synthesis of what he believes to be four threads that have influenced the cultural and political diversity of what later became Eritrea. These include the Aksumite kingdom, the Afar kingdoms, the Tigre-Beja belt, and the Kunama and Baria (Nara) Group. Because the Aksumite kingdom has been written about extensively, Omer provides a balance by focusing primarily on the latter three groups. There is rich information in this chapter which draws from early anthropological textual sources on the region as well as a significant Arabic-language text on the history of the Afar kingdoms. It lends more shape and detail to resist the anachronistic Ethiopianist argument that the modern-day states of Eritrea and Ethiopia can be traced back to a unified precolonial past. Instead, Omer’s work demonstrates the diversity of the region’s ancient past and emphasizes political kingdoms whose cultural contributions can still be seen today.

The author discusses the Eritrean experience under Italian colonial rule and during the burgeoning political culture of the 1940s for the remainder of part I, highlighting key areas of change. He summarizes changes under colonialism that had to do with demographics, especially between various religious and ethnic groups, infrastructure, land tenure, military conscription, and formal education. In his discussion of education for example, Omer cites and includes photographs of the 1934 first grade certificate of one of the few Eritreans who were permitted to study, showing examples of the types of subjects Eritreans were taught. Sources like this, from Omer’s personal communication with individuals who have a personal family archive, enhance his historical narrative. In the discussion on military conscription and the askari, Omer demonstrates how widespread and impactful the experience must have been on Eritrean society and identity. The sheer number of conscripts relative to the broader Eritrean population and their conscription from all regions of the territory suggests that this military experience shaped and changed the fabric of Eritrean society. However, there is still a great need for further research to understand the precise ways that these changes took shape. Also, we have yet to possess complete figures for the number of Eritreans that perished serving in the Italian colonial army, partly because Italians did not keep precise record of their “native” forces.

The concluding remarks about Italian colonialism, however, are not supported by the author’s narrative nor by existing research on colonialism. He states that the Italians “brought peace and stability,” that we “more or less embraced” Italian occupation, we “did not resist like the Ethiopians or the Libyans,” and that Ethiopians “were more brutal than the Italians” (67-68). Firstly, Italian military conscription, as the author discussed, destabilized over half of Eritrean families and land displacement disrupted traditional land tenure systems and the traditional economy. Secondly, to compare the brutality of two regimes that were not historically concurrent is not something that can be empirically proven nor is it particularly productive to do so. Lastly, resistance to foreign occupation is not only measured by armed or military confrontation. Bahta Hagos is famously cited as one of the only Eritreans who launched a resistance to Italian colonial rule, but this understanding of resistance is narrow and incomplete. Individuals and social groups resist oppression using the limited means available to them and within the confines of the system they are under. Examples of various forms of resistance include an intentional slowdown or sabotaging of work by laborers, absconding and spying by individual ascaro, poisoning by cooks or other domestic strategies, or simply migrating to Ethiopia, to name a few. The political culture of the 1940s, as well, reveal the disdain and even hatred that most Eritreans held toward Italian colonial rule. Italian residents were attacked regularly and regardless of their affiliation to the political agenda of andinet or independence, the vast majority of Eritreans stated that they would never agree to a continuation of Italian presence, even under temporary trusteeship.

The second and final section of the book discusses the Eritrean Liberation Movement (ELM) and the Eritrean Liberation Front (ELF) and it is where the contribution of the book to Eritrean historiography is the strongest. It draws from the work of familiar scholars such as Alemseged Tesfai, Joseph Venosa, and Dan Connell, but it also incorporates previously underutilized sources such as Arabic-language historical literature, unpublished eye-witness accounts, and the archival transcripts of the many interviews Gunter Schroder conducted with former ELF fighters and other activists in Sudan in the 1980s. These sources all allow Omer to give detail and anecdotal evidence to bring to life the world of personalities that formed the ELM and later the ELF. There is no clear argument about these two organizations or the early formations of the struggle for independence, but it seems to prepare the reader for a continued, comparative discussion in the second book. One glaring omission in the discussion of the early movement was the presence of women. It is an all-male world that seemed to animate and shape the Eritrean movement in Port Sudan, Cairo, and clandestine cells in Eritrea. While this might be historically accurate in regard to the formal leadership of organizations, how might we understand the role and agency of women at this time? If they were completely barred from public participation, why and how was this enforced and what was the impact on the movement?

Though limited in some of the ways described above, The Dynamics of an Unfinished African Dream is a compelling and very valuable addition to Eritrean history. It demonstrates the commitment of Eritreans to writing and understanding our history for ourselves. Mohamed Kheir Omer has been compiling, interpreting, and sharing history as a non-specialist for many years and his activism has contributed to making it possible for us to freely discuss the historical issues that both hinder and liberate our community.

* Timnet T. Gedar is a PhD candidate in African history at the University of Michigan. She holds a graduate certificate in Museum Studies and is interested in the intellectual and political history of the Horn of Africa, historical and ongoing decolonization, and radical museum practice. She can be reached at timnet.gedar@gmail.com.