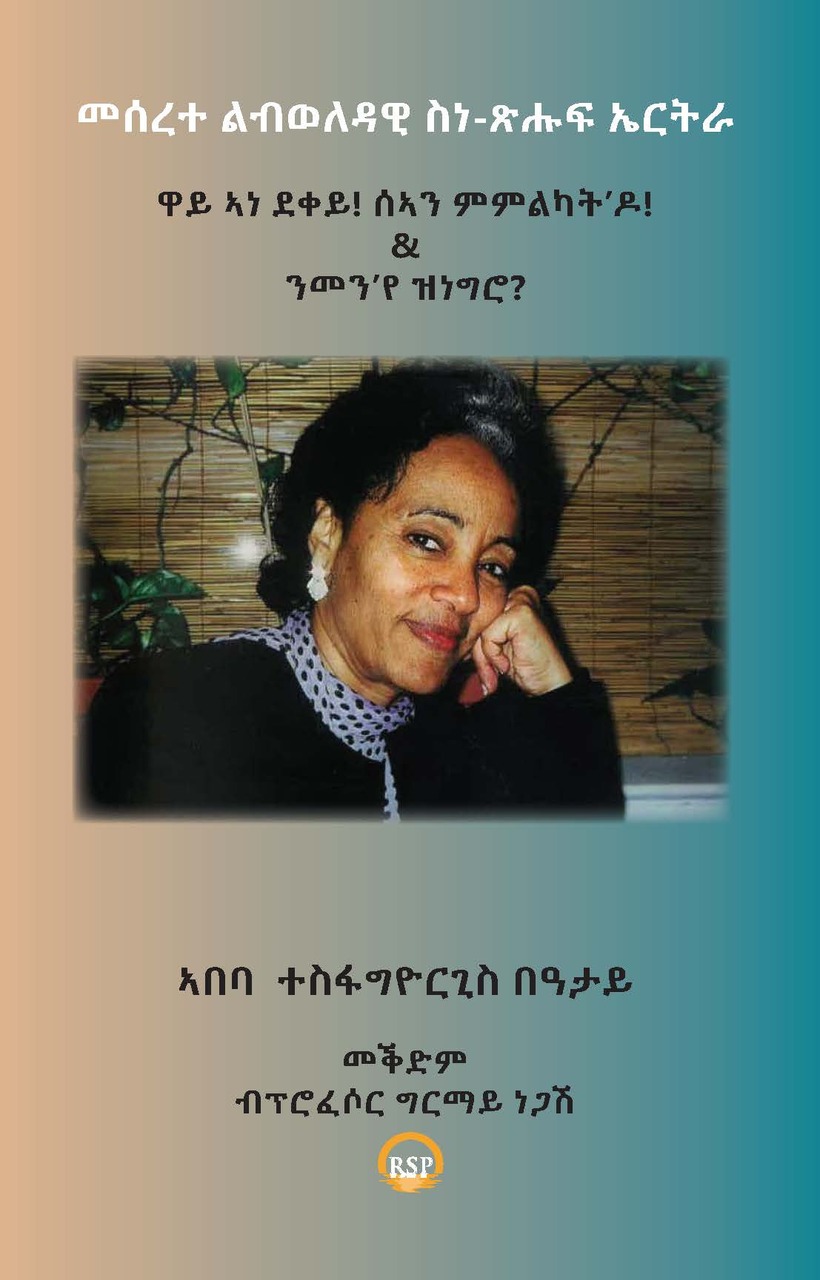 When reading early Eritrean novels, a reader is required to put the historical context in which a certain book was written. The reader’s perspective and contextual readings might give nuanced understanding of the work. In other words, Tigrinya literature readers must be compelled to keep the oral tradition way of telling stories in mind. Else, a great deal might be missed.

This piece is about another pioneer in her own right who rid herself from the shackles of colonial hegemonic dominance in literature. Abeba Tesfagiorgis Baatai’s (1967/1974) two books can be said to have a distinct honor that severed ties from the colonial discourse both in their content and in their originality. Her books do not suffer from the overarching colonial discourse breathing on the author’s neck as was the case to writers who preceded her only two decades prior.

The mindset and a concern related to this notion weighing heavily on a novice reader of Tigrinya books is to steer clear from offering a review of Tigrinya books, at least at this junction in one’s reading journey. This is not, however, to say that Western educational background in literature would not arm one to offer salient impressions of any Tigrinya books. To the contrary, such background might serve as an asset that would allow a critique certain intersectionality between and betwixt that can be gleaned from the literature of the home country and that of the adopted one, in this case, the United States. Against this backdrop is where one must give a careful consideration when offering a glimpse of the paired books. Hence, I offer my impression herewith with this careful consideration in mind.

For the occasion of International Women’s Day, I was invited to read Abeba Tesfagioris Baatai’s two books with the intent of having a panel discussion with the author as a guest of honor. The original title of the two books, ዋይ ኣነ ደቀይ! ሰኣን ምምልካት’ዶ (1967/68) and ንመን’የ ዝነግሮ? (1974), are now paired under a title, መሰረተ ልብወለዳዊ ስነ–ጽሑፍ ኤርትራ. The two books as authored by Baatai remain to be the earliest Tigrinya literatures written by an Eritrean female.1 The two novels were made possible through Kassahun Checole’s Red Sea Press. The publisher’s initiative to re-publish such rare books that have been long out of print helps familiarize young readers with Eritrea’s pioneer writers. The era in which the two books were written fall under King Haile Selassie’s reign, when Eritrea was occupied by Ethiopia. The historical context of Asmara in the 1960s and early to mid-1970s is characterized as two decades in which art, literature, high culture, sports were flourishing, so much so that many writers call it an era of the renaissance. Live and recorded music, particularly, Tigrinya and Tigre songs from that era are now considered classic songs. Live theaters of the West were performed in Tigrinya and many organically concocted works of theatre works were also performed in Tigrinya. Western films, Indian movies, Arabic movies were weekend activities not to be missed for Asmara dwellers. Sports, mainly, soccer was a huge activity with Eritrean population from the neighborhood kids occupying the streets to the professional ones playing in stadiums. Car races and bicycle races were par for the course as well. Be it books translated into Tigrinya language or organically written by Eritrea’s sons and daughters, were bourgeoning in their own right in those two decades.

When analyzing The conscript, Negash (2009) offers the following salient observation about indigenous literature, that “the works connect intertextually through formal dualities such as the juxtaposition of the autobiographical and the collective” (p. 76) [.] Baatai’s (1967/68) ደቀይ! ሰኣን ምምልካት’ዶ? (henceforth referred as first novel) takes such dualities to a new realm, where the voices of the narrator and the author work in tandem to move the novel forward. In her first novel, what one will find striking is the blurring between the narrator and the author where each lends a voice to the novel; the intertwining of the two voices to move the story forward one feels resistant towards, but the stories are so compelling that they take prominence above and beyond the competitive narrator voices. This blurring of author/narrator notwithstanding, however, what one will find in book 1 is its forceful psychological, sociopolitical and socioeconomic commentaries that it elicits in a reader. The commentaries are vast, all encompassing.

Negash’s (2009) work is informed by the two Tigrinya texts that date back between 1890 to 1950. In these works one is made aware of one other uniquely poignant point in that “…the use of indigenous oral tradition […]  as a vehicle to tell lived and imagined experiences…the contested political and cultural space” (p. 76). Baatai’s first novel appears to employ this literary technique in the use of the Tigrinya language ranging from the rural to the urban. What this does is offer a reader the historical capsule of time, an era where transformation of a society from farming life to the city life was taking place. For example, a reader is made to notice the use of Tigrinya language as it is being transformed from the rural to urban. Equally importantly, the transformation of the natives in their notions of being modern individuals is manifested at individual level as well as communally. These negotiations are not only captured intertextually in Baatai’s first book, but also in the second.

In the Forward, Negash cites the author’s interview in which she captures the ambience of the neighborhood and the community in which she grew up in Asmara. She states that some of the residents of her neighborhood relied in farming as a source of their livelihood. And some others worked in factories where these kinds of establishments were beginning to flourish in the city of Asmara. This was during the transition when Italy lost in WWII to the Allies where Britain became the caretaker of Eritrea, until Ethiopia’s King Haile Selassie era. At this time, Baatai states that opportunities for education were few and far between. Eritreans, however, continued to migrate in droves from villages to the city to work in the factories.

But such mushrooming of jobs and educational opportunities were beginning to stagger by the late 1960s and early to mid-1970 as Baatai recounts the reason she was compelled to write her two books in the Introduction. At her job with Ethiopian Airlines desk in Asmara, she would notice in how young men who finished high school, full of hope and dreams, would come to her office seeking for a job only to find them disappointed when she would tell them the unavailability of employment. She also relates that Asmara University and Addis Ababa university couldn’t accommodate to all of these students to aspire for higher education. These scenes the author found it so distressing that she would resort to writing, which left her feeling relieved. This continued until two of her friends encouraged her to keep writing and to think of turning her drafts to a book. The author in turn, now, wants to pay such wisdom forward as she urges young Eritreans to write about their life experience.

A little about book 2 which merits a mention is that in the second book, a reader will notice a stark difference between the first and the second. In the latter, there is more boldness in the characters that the author creates. The seeming competition between the author’s voice and that of the narrator disappears completely. Baatai (1974) uses literary technique that a reader could easily relate to: The use of letter writing. These letters showed as the growth of the main character who was maturing. As someone from young age who used to write letters abroad on behalf of my mother and father to relatives who were overseas, it was something that left me immersed in the book. In fact, one of the main means of communication was through letters. I have letters written in Tigrinya that I cherish deeply; they go as far back between 1977 to 1987 with very sporadic few that span to the1990s.

You can order the book from Red Sea Press following this link.

*Beyan Negash has been writing for different Eritrean online outlets such as Dehai (1995-2001) and later Awate.com since 2001. He lives in Southern California and can be reached at beyan.negash@gmail.com.