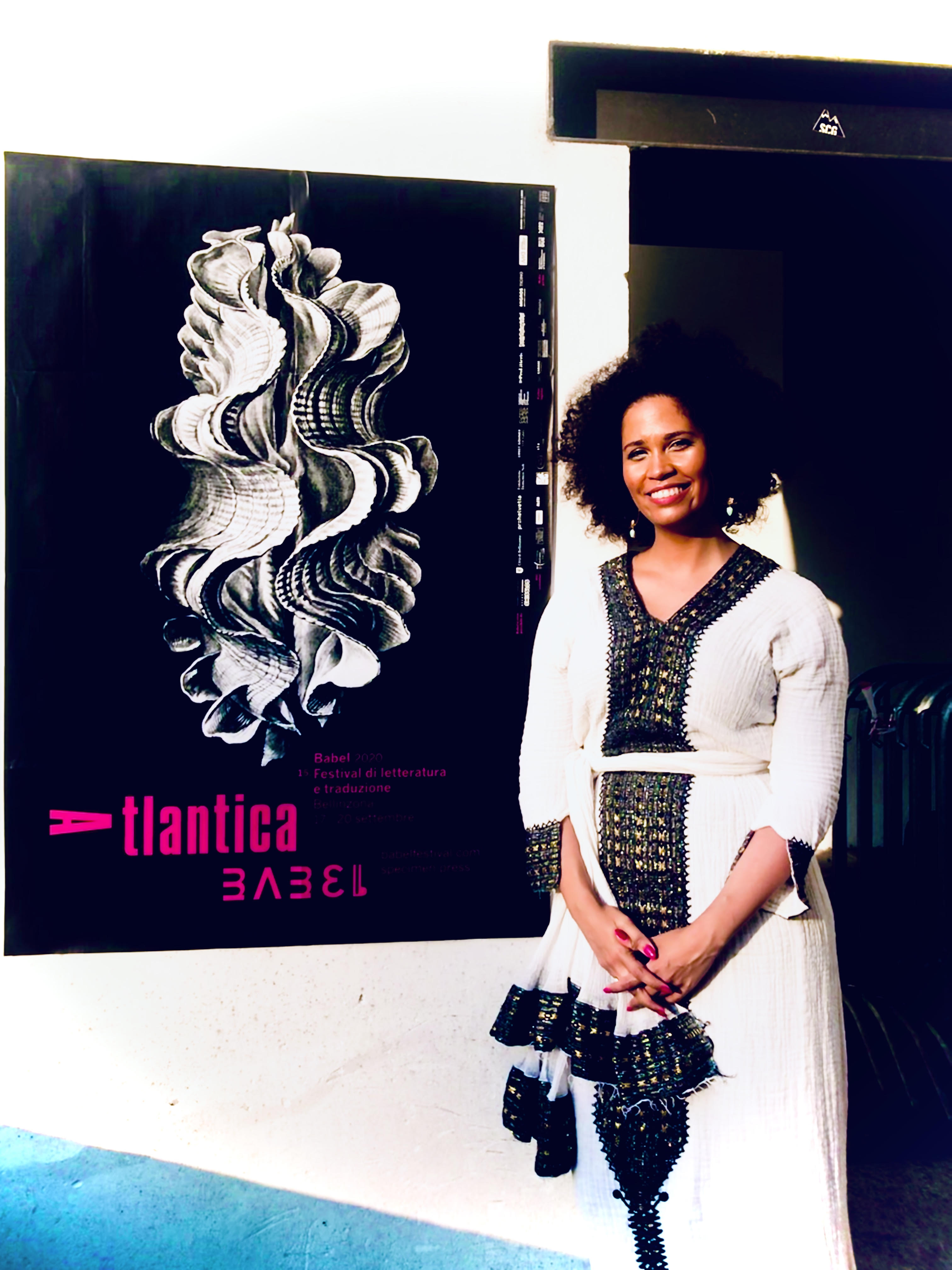 Conversation with Desta Hailé, Winner of “To Speak Europe in Different Languages”

Desta Hailé is the daughter of Reesom Hailé, Eritrean poet laureate, as well as a celebrated creative in her own right. A vocalist, songwriter, and educator, she recently won the inaugural writing competition, “To Speak Europe in Different Languages.” This competition was launched by the Asmara-Addis Literary Festival (in Exile) and Specimen Magazine. The judging panel called her winning submission, York to Tehran, “poetic and insightful.” In this written interview with Timnet T. Gedar*, she discusses this and other parts of her work and practice.

1. One of the first things others may recognize about you is your connectedness to several cultures, countries, and languages, whether that is by birth, by residence, or by education (passing through 70 or so countries?!). You have had a lived experience that is marked by diversity and this can be quite rich. However, exposure to diversity in and of itself does not do all the work. What approaches or practices have you used in order to truly learn from, embody, or express the diversity of your experiences in the way that you do?

I guess you are right! My family is Eritrean, English, Thai, American… there’s a lot going on, up close, so I haven’t always considered it a particular effort, it was just how I grew up. However, when I am somewhere new, I try and get as familiar with the language, music, food, literature, history, and culture as possible! Making friends with people from different backgrounds, spending time together, breaking bread, asking questions, sharing stories… I guess that’s how I’ve learned and grown through these experiences? In terms of embodiment/expression… I’ve kept a diary since age 6… I’m always reading and taking some language class or another… writing music has always been a favourite mode of expression, and I’ve been lucky to work with people from all walks of life and travel lots for music or teaching.

2. In terms of your expression/modes of expression, you are a singer and educator that has recently won a writing competition. How are your musical artistry and writing connected for you, if at all? How do you approach multiple or varying modes of art?

I really enjoy writing music and song lyrics… but there’s plenty you can say with no words at all… I love Bobby McFerrin’s album ‘Circle Songs’ endlessly, for example, and it has no words… and I think most of us can relate to really connecting to a song even if we don’t understand the language it is in. I was recently commissioned by UNESCO to compose a song for their Green Citizens campaign, and I purposefully stayed away from words so that no languages were favored over another.

Music is something social for me, I associate it with bandmates, collaborations, gigs; writing is usually solo. That said, it always finds its way into my other artistic practices. I do a lot of theatre facilitation with young people, and use creative writing/group writing to get them devising their own work, telling their own stories. I interned at the Theatre of the Oppressed in Brazil, which does a lot of work around identity and power, and I’ve always been interested in how theatre can be used in social justice, community and movement building. Writing is also a part of Theatre of the Oppressed, especially in terms of interpreting it, like with Newspaper Theatre.

3. In your winning submission, “York to Tehran,” you take your readers on a journey alongside your aunt Ruth, crossing several miles, borders, and themes. I noticed your skill and creativity with weaving together fragments – glimpses of landscapes, languages, and memories. Even the format of most of the piece was made-up of sentence fragments. Is this the way most of your aunt’s diaries were composed or was this your own configuration reflecting the fragmented nature of the archive through which you have access to her?

Thank you. To be honest, it was just so much to condense into the 2000 word limit, that I had to chop it up a lot! The diary was very visual… Ruth was a botanist/horticulturist and a visual artist, so reading her writing was almost like watching an old Super 8 film. She included sketches, postcards, and tickets as well — it really transported me back to her 1963 road trip!

4. I found the idea of blending your own words and words from your aunt’s diary to be a powerful method of engaging with a family member or loved one, especially one that you have not “met.” Through this method of co-writing, you are able to co-produce something, a tangible reflection of the relationship you share with her. This seems to be a step beyond exploring photographs and memories, becoming a generative interaction. What led you to this particular way of engaging familial bonds and/or have there been other ways that you have attempted to capture “family symmetry,” “shared geometry,” or “tangible waves,” as you describe them in your piece?

‘Generative interaction’– I like that! It was really enjoyable for me, communing with Ruth, getting to know her through her own words. Her diaries were literally my only option for discovering this experience with her, as she is no longer around and no one else I know went with her!

I guess because my family is so spread out, all so different, and there isn’t always a common language, I’ve tried to connect through writing, or sharing photos, or visiting… or learning about them from their friends. When you find a personal connection with a relative, or notice how similar they are to another family member, it’s special. Not just superficially, although that’s fun too– I think I look a lot like my Dad’s mother and aunties.

I’m grateful to my family who have offered me connection and insight into family history. A lovely aunty of mine, Asefash, kindly sent me a copy of a letter one of my ancestors wrote, Moges Asgedom, before trying to kill Graziani. It was really cool for many reasons, but he writes about how he was studying French at the Lycee in Addis- it made me feel closer to him, that he enjoyed learning languages too. She also told me about my grandfather Haile being a musician, playing shambuko! It made my day! My uncle/cousin Teclemichael has always made a big effort to connect me with family all over the States and Europe, and helped me sketch out a massive family tree one day on the train to Holland. There are hundreds and hundreds of us!

I also try to act as a bridge myself when I can… I recently connected with a cousin of mine, who is a singer too, ​Efrem Tewelde.​ Our grandfathers were brothers. I never met my biological grandfather, but I met his– and I was able to send Efrem a photo of him, who he had actually never met himself. In turn, he was able to tell me that his grandfather, who I had met, loved languages too and spoke several, which I didn’t know. It’s like we are always playing catch up with the generations that came before us, learning new things about our family all the time and putting the pieces together, together. Cyclical. Especially now that we are often separated, in far-flung countries, for years and years at a time– anything that helps us stay close means the world.

5. Of course, I cannot go without asking you about your beloved father, the great poet and icon, Reesom Hailé. In what ways has his influence, both personally and via others’ recognition and love for him, shaped you and your work?

Ah, this could be a whole encyclopedia! Everything. He made me passionate about reading, music, injera, tsebhi, life! He was very funny and very loving; a big, mushy, moody Cancerian. He loved photography, gardening, cooking. He loved languages and spoke many: Ge’ez, Tigrinya, Amharic, English, French, Spanish, Arabic… I wish he’d taught me Tigrinya when I was little, but I guess it was hard when we often lived somewhere with no Eritrean community and English was the common language at home.

He always took me to concerts and music festivals from childhood, and my friends all loved him. My passion for music, poetry, radio – he’s the root! The fact that he made such an impression on so many, and that even strangers regularly reach out to me to tell me what his poems mean to them, is really wonderful for me because it keeps his memory alive in so many hearts. He encouraged me to be independent and adventurous, not to fear anything and to do what made me happy (hence the name, maybe!). He named me after ​Desta Bairu​, a cook “who took care of all the kids like me who got to the States with no English and no money”). His old friends and their families extend so much love, generosity, care (and shiro!) to me wherever I go I always feel looked out for. Last year I was hosted and spoiled by an old friend of his, Tsegga, and her sister, Negisti, in Dar es Salaam and Helsinki! Continuous blessings.

My Dad told me many stories but always left a little bit out so I’d have to fill the rest in myself, research it or make it up. It’s only now that I’m clocking that! He left me a lot of story-telling work/completion to do… keeping me on my toes from beyond! I’m hoping to release my first book early next year, and it is the result of trying to complete a story he began telling me– about his time in New York City in the 1960s, as one of the first Black models. From Comboni College to Max’s Kansas City nightclub– he really lived several lives! It’s called Black Beauty Model Agency. It has meant meeting people who knew him back in the day… so even 17 years after he passed away, I’m still learning about him and meeting incredible people thanks to him.

My father really adored Eritrea, and had many hopes and dreams for its future, which I hope to see come true.

Yes, If you would like to access Reesom Hailé’s poetry, you can grab the full books here or get a mini eBook collection. You can also listen to many of the poems here.

The poems from his third book, We Invented the Wheel, were never recorded. If you would like to contribute to this project by recording your favorite poem from this collection, please fill in this Google form and keep an eye out for Radio Reesom launching very soon.

*Timnet T. Gedar is a PhD candidate in African history at University of Michigan and secretary of PEN Eritrea. She can be reached at timnet.gedar@gmail.com.